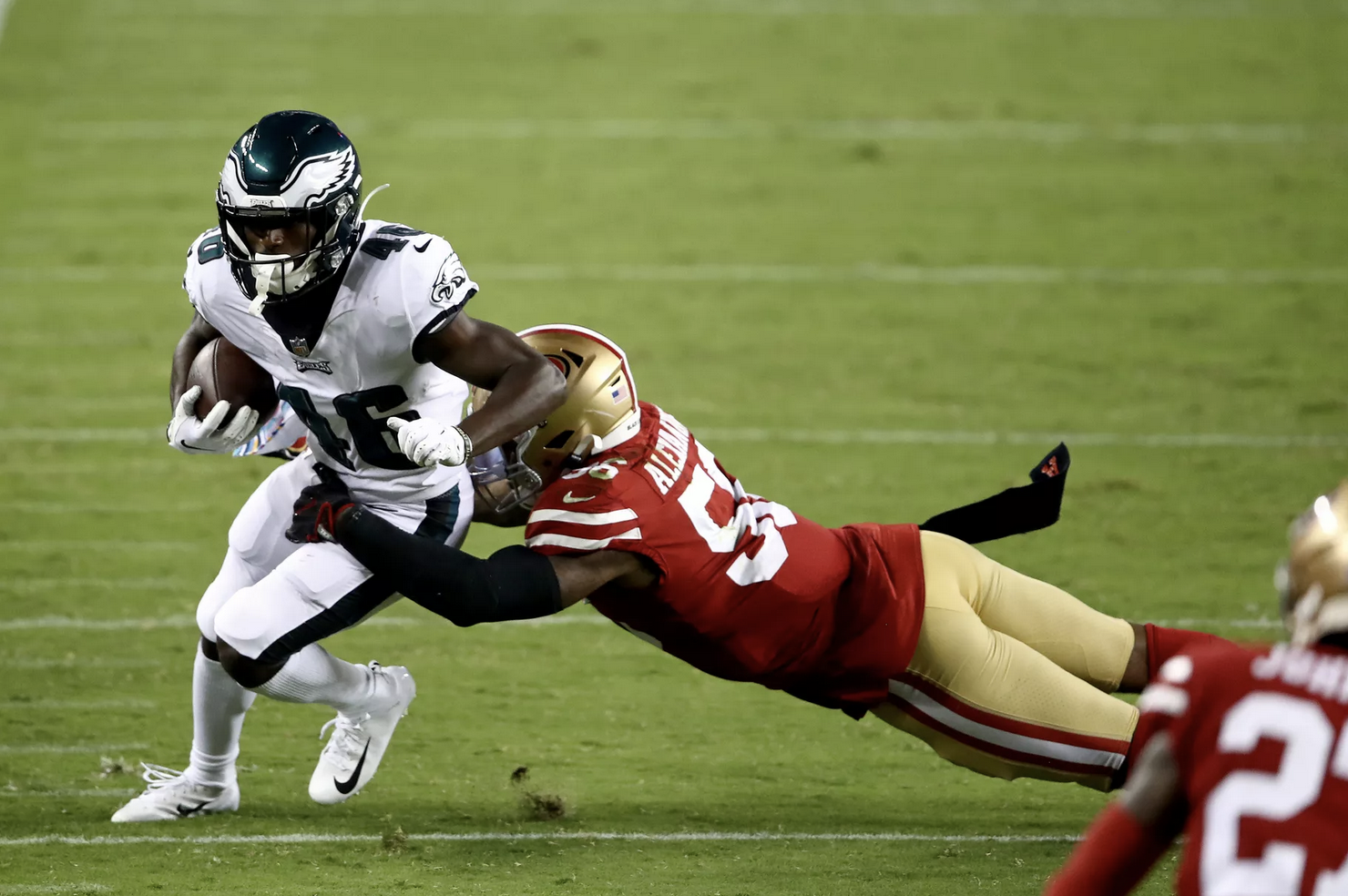 The Eagles scrapped and battled their way to their first victory of the season in Week 4 against the 49ers. I have questions. (Photo by Ezra Shaw/Getty Images)

Question number 1: What is Doug doing with Miles Sanders?
Sanders is unquestionably the Eagles best offensive weapon. He’s obviously the team’s best running back, but he’s their best receiver, too. How does he end the game with only 17 touches? The Eagles are missing their top 3 receivers and their 1A tight end, and the top running back only has 17 touches? Why, Doug, why?

I went back and looked at the Bengals and 49ers games to determine how many rushing attempts Sanders had in the 4th quarter and overtime. Both games were single possession games, so ignoring the running game shouldn’t be a realistic option. Against Cincinnati, Sanders rushed seven times for 22 yards over the final 25 minutes. Against San Francisco, he had two rushes for two yards. Nearly three quarters of crunch time football and your star running back has 9 attempts? Excuse me?

What’s worse, when the Eagles were a 1st down from clinching victory against the 49ers, Sanders didn’t receive a single touch. Instead, Pederson went Corey Clement, Boston Scott and then Carson Wentz. None of them gained more than a single yard. I don’t care about ball security concerns there. Give it to your best player.

Question number 2: If Doug is such an offensive guru, why are Eagles receivers never open?
I watch a lot of NFL games. No team throws to covered receivers more than the Eagles. Maybe Carson Wentz misses an open option from time to time, but go watch the coaches film, these guys are almost always covered. I hear the talent excuses and that’s certainly a reasonable explanation. However, the Eagles aren’t the only team with a talent-deprived receiving corps. Teams like the Raiders, Patriots, Titans (since AJ Brown has been hurt), 49ers, Packers (injuries) and even the Jets have guys streaking open from time to time. Scheme can get anyone open a handful of times per game, regardless of skill or quarterback. Not with the Eagles, though.

Question number 3: Uh, Doug, seriously, WHAT ARE YOU DOING?!?
The Eagles have enough offensive troubles right now. Getting into the opponents side of the field is a victory in and of itself. Overcoming injuries is one thing. Overcoming a coach’s disastrous play-calling is another.

Late in the 4th quarter with the Eagles trailing by 3, Pederson ran a jet sweep to Adrian Killins. The play lost 12 yards and likely pushed the Eagles out of field goal range. Did I mention Killins was on the practice squad all season? Running a trick play for a guy off the practice squad when a field goal ties the game seems unwise, but maybe that’s just me. Anyway, the Eagles recovered and got a 1st down via penalty.

Question number 3: Can the defense force real turnovers?
It was nice to see the Eagles win the turnover battle for once, but let’s be real; the two interceptions were more gifts than forced turnovers. Those don’t happen often if you’re playing an actual NFL quarterback. The defensive line must remain a nuisance and give their backend free plays like they did Sunday. I’m dubious.

Question number 4: What the **** was going on with the clock late in the 4th quarter?
Anyone else think for sure the questionable clock tactics would cost the Eagles? Ruling a touchdown at 2:09 was a huge win for the 49ers. Though the call was overturned, they got a free play. Had the receiver correctly been ruled down, San Francisco would have been forced to use their 2nd timeout or let the clock go to the two-minute warning. Instead they scored with 2:02 left on the clock.

Then the onside kick happened. Richard Rogers did not cleanly field the kick, so only one second coming off the clock is absurd. Now, instead of only two timeouts with 2 minutes or less to go, the 49ers get a 3rd stoppage of time. That’s a pretty big deal. If the clock was run correctly, the 49ers would’ve received the ball back with about 60 seconds remaining instead of 1:40. I won’t even get into the official flopping and gifting the 49ers another 7-8 seconds on their final drive.

Question number 5: The Eagles are the only team in the league to think their practice “squadders” are hall of famers, right?
There’s a reason these guys are on the practice squad and not on your or anyone else’s active roster. Only the Eagles insert these guys and expect greatness. That jet sweep to Killins was mind-boggling on so many levels.