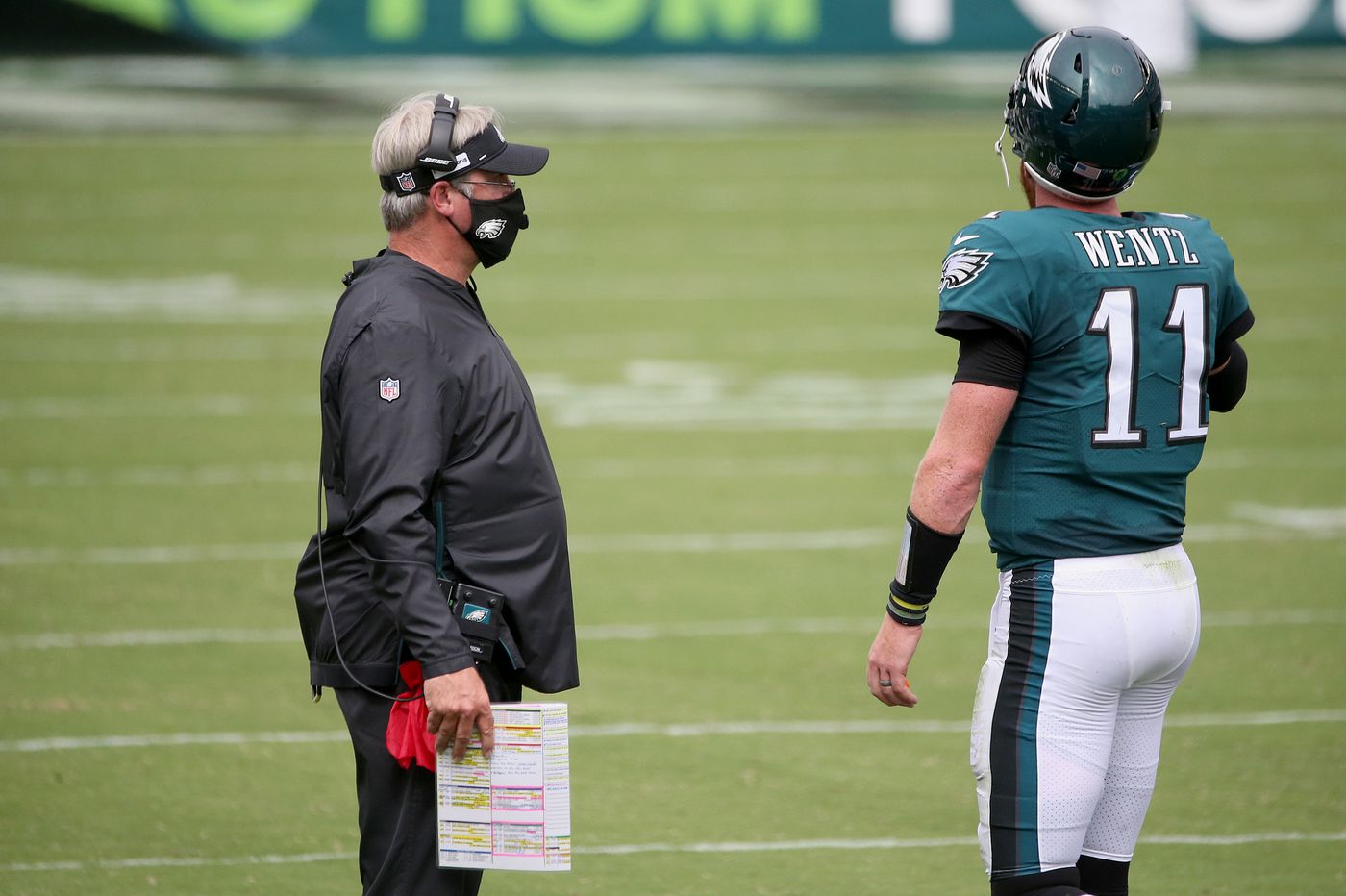 Doug Pederson has always been aggressive and fearless. He plays to win. Not on Sunday. (Photo by TIM TAI)

Doug Pederson has taken a lot of grief for his decision to punt on 4th down, essentially accepting a tie. It was a far cry from his aggressive style that won the Eagles a Super Bowl and led to his own book being titled, “Fearless.” Punting wasn’t my biggest gripe with Dougie’s performance in Week 3. It was what preceded the punt.

Going for two was the best chance the Eagles had to win. It’s 50/50 right then and there. Two yards from victory. The offense had some momentum and confidence. Carson Wentz had made a number of plays all afternoon by improvising with his legs. Given their performance through 179 minutes and 39 seconds of 2020 football, that was the Eagles best shot at victory. Doug chose passivity and played for overtime.

On their second possession of overtime, the Eagles started with the football at their own 45. After a Carson Wentz sneak on 3rd and 1, the Eagles had 1st and 10 at the Bengals 44. From there, it’s about a 60 yard field goal. The Eagles ran on 1st down for 1 yard. On 2nd down, the Eagles ran it again, this time Wentz taking it on an awkward option play. 2 yards. This is your offense, Doug? Accepting the odds of a 60 yard field goal instead of pushing the ball further into Bengals territory? When did your grapefruits turn to blueberries?

I get it: Wentz was a mess again Sunday. His head is as clear as Laremy Tunsil’s gas mask. Running the ball on 1st and 2nd down with no timeouts was a clear indication Doug did not trust his quarterback. But why?

Wentz had worked the offense down the field to tie the game at the end of regulation. It wasn’t pretty, but he got it done. He got the offense a 1st down at the Cincinnati 42 in overtime before a penalty brought the Eagles back and scuttled the drive. Sure, he missed Miles Sanders for the win, and yes, we all hold our breath every time he unleashes the football, but you’re on that field to win. Banking on a 60 yard field goal for a win is playing not to lose. Showing confidence in Wentz (and simplifying the offense) is the best way to bring him back from whatever wasteland he’s stuck in right now.

I’m not pardoning Wentz, either. He’s too talented and too experienced to go through a funk for this long. It’s inexcusable. On the other hand, when was he at his best last season? When the Eagles were decimated by injuries and Doug simplified the offense for the guys coming in off the practice squad. It wasn’t simplified for Wentz, but he excelled in it.

Wentz is like Cam Newton. Once Carolina told Cam to stand in the pocket and read defenses his lethality dropped significantly. Cam and Wentz are back yard quarterbacks. Don’t put baby in a corner. Let baby dance. Let Wentz react rather than telling him where the ball is supposed to go. He’s clearly overthinking every pass. He’s not seeing open receivers, and he’s forcing the football into places that have been decided pre-snap (see his 1st interception Sunday).

The season is on the brink, Doug. Don’t concern yourself with your quarterback’s emotional state. Don’t play to lose. Do what you’ve done since you arrived in Philadelphia. Let it rip.