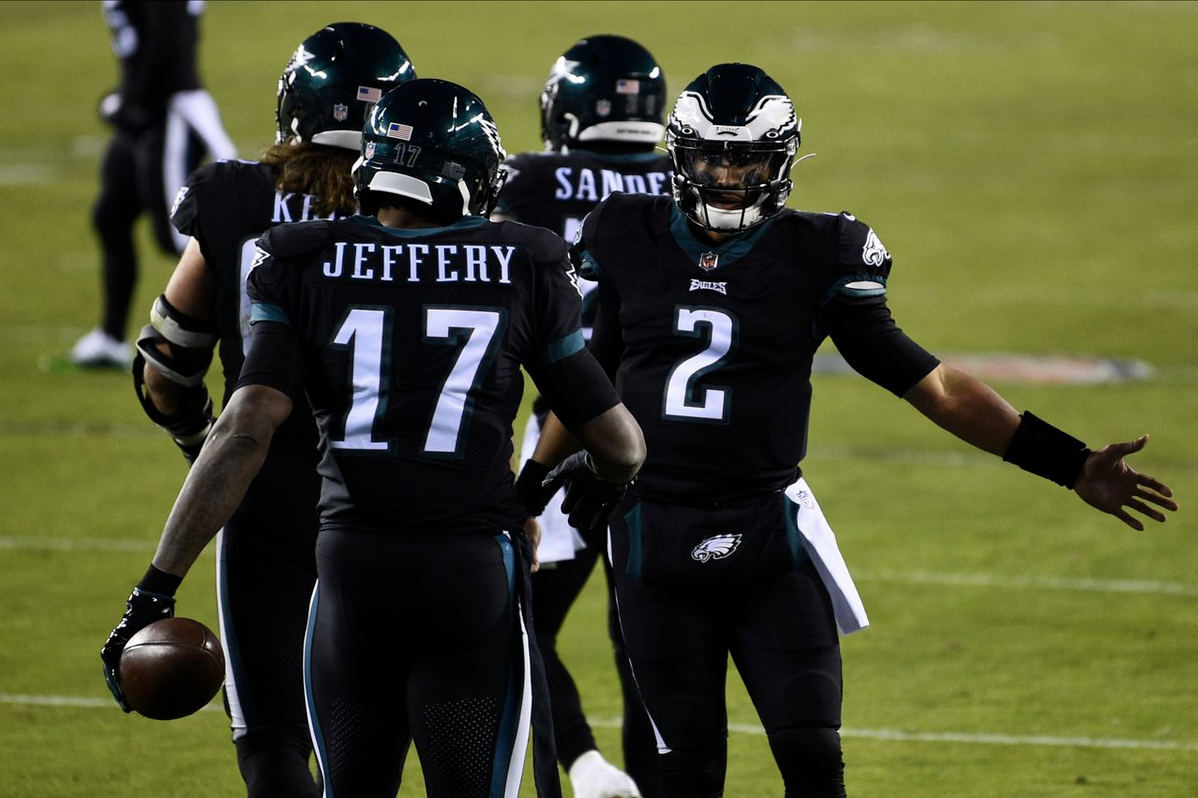 The franchise’s struggles in 2020 already set the Eagles on a path for some difficult decisions. Should the head coach return? Should any coach return? What about the GM? The $100 million franchise quarterback would not be a question moving forward. Or so one would’ve thought. Instead, Carson Wentz melted down into one of the league’s worst quarterbacks. Even Wentz’s not-yet-kicked-in extension doesn’t make him a sure thing for the Eagles in 2021. Add to that the backup rookie quarterback looking like a Russell Wilson clone, albeit at the infancy stage, and it’s a full on disaster in Philadelphia. So what should the Eagles do about next season?

Truthfully, I think Jalen Hurts struggling mightily may have been more helpful to the franchise in the short term. They could move Hurts back to the backup role and devote their entire offseason to fixing Wentz as their franchise quarterback. Now that that option has been blown to bits, is Wentz even on the team in 2021?

I think not, and there are a number of reasons.

First, Doug Pederson and Carson Wentz do not work. It’s been three seasons since Frank Reich left for the Colts. In the time since, Wentz has looked lost and disjointed in Pederson’s offense. Wentz’s best stretch in the offense came last December, when the Eagles were so injured at the talent positions that Doug admitted the offense was a dumbed down version hardly resembling his normal offense. Wentz thrived in the grip it and rip it freedom of that temporary offense. He single-handedly rallied the Eagles to a division title. For reasons no one has explained, that offense was abandoned in 2020 and Pederson’s overthinking-everything offense was back, and with it, a confused and neutered Wentz.

It really doesn’t make sense what Doug does sometimes. In the two-and-a-half games Hurts has played under center, Pederson has run the football more, put his quarterback on the move more, designed more plays to get playmakers the ball in space, and even had more downfield routes to stretch the defense. Where was all that when Wentz was back there?

I’m not excusing Wentz’s play. He earned his spot on the sidelines. However, it’s not like he was playing with the same deck Hurts has enjoyed. I will say this about Hurts… his decisiveness is what has elevated the offense most. Wentz was so shell-shocked that he could no longer make decisions. Two seconds and Hurts knows where he’s throwing the football or he’s taking off with it. It’s given the offense a massive boost and forced opposing defenses to react instead of allowing the defense to dictate the game. Anyway, back to Wentz being on the team in 2021… Pederson and Wentz don’t work. We’ve seen enough.

Second, Hurts has played well enough that the fan base is once again completely enamored with the backup quarterback. THIS IS WHY YOU DON’T SPEND A 2ND ROUND PICK ON A QUARTERBACK AFTER COMMITTING 100 MILLION DOLLARS TO YOUR STARTING QUARTERBACK. If Wentz returns as the starter in 2021, he’ll have a franchise darling breathing down his neck. Any sign of struggle and the fan base will clamor for the backup. It’ll be 2018 all over again, only 20 times worse. It’s a recipe for disaster.

Three, Wentz is undeniably a great person and teammate, but the Eagles have done him dirty. They’ve whiffed on draft picks, put him in horrible situations with a joke of an offensive line in front of him, abandoned him with laughably bad play calling, surrounded him with too many voices, and failed to add an impact free agent over the last three years. Why would anyone be surprised by the report leaked this past weekend that Wentz doesn’t want to stick around to be a backup? Who would? When push comes to shove Wentz may decide he’s had enough with the Eagles and would like to move on. And really, who could blame him?

There are no great options here for the Eagles, and it’s entirely their fault. They created this fiasco when they drafted Hurts. Let’s say the Eagles aren’t idiots and take Justin Jefferson instead of Jalen Reagor. Wentz probably looks a lot better. Maybe they use that 2nd rounder on another receiver like Van Jefferson or Denzel Mims instead of Jalen Hurts. Do you think the offense would’ve been as putrid as it was for most of the season? No, but even if it were, the Eagles wouldn’t be turning to Nate Sudfeld. They’d be doing everything they possibly could to figure it out with Wentz.

As a result of the last few weeks, the franchise will now likely commit to a rookie quarterback with a questionable arm after only four games, while also eating a $34 million cap hit to trade their franchise QB. Are you sure they HAVE to do that? No, but it’s the only way this gets resolved unless Jeffrey Lurie is willing to fire Pederson and sell high on Hurts, and that won’t happen.

I know we like to think of athletes as machines who shouldn’t feel emotions but that’s just not the case. Aaron Rodgers was pissed the Packers blew a first round pick on a quarterback instead of a position that would help him. Tom Brady despised the addition of Jimmy Garoppolo so much he leveraged the owner into trading him even though it was against Bill Belichick’s wishes. So sure, it would’ve been nice if Wentz was unbothered by Hurts presence and was stoked about returning next year to be Hurts’ backup, but that’s not how real life works.

In real life, the Eagles are a hot mess, a mess they created. Not even two promising performances by a rookie quarterback can shine bright enough to dry up the mud the franchise finds itself stuck in. Where they go from here will likely be one bad option with slightly more upside than other bad options, all stemming from bad decision after bad decision.