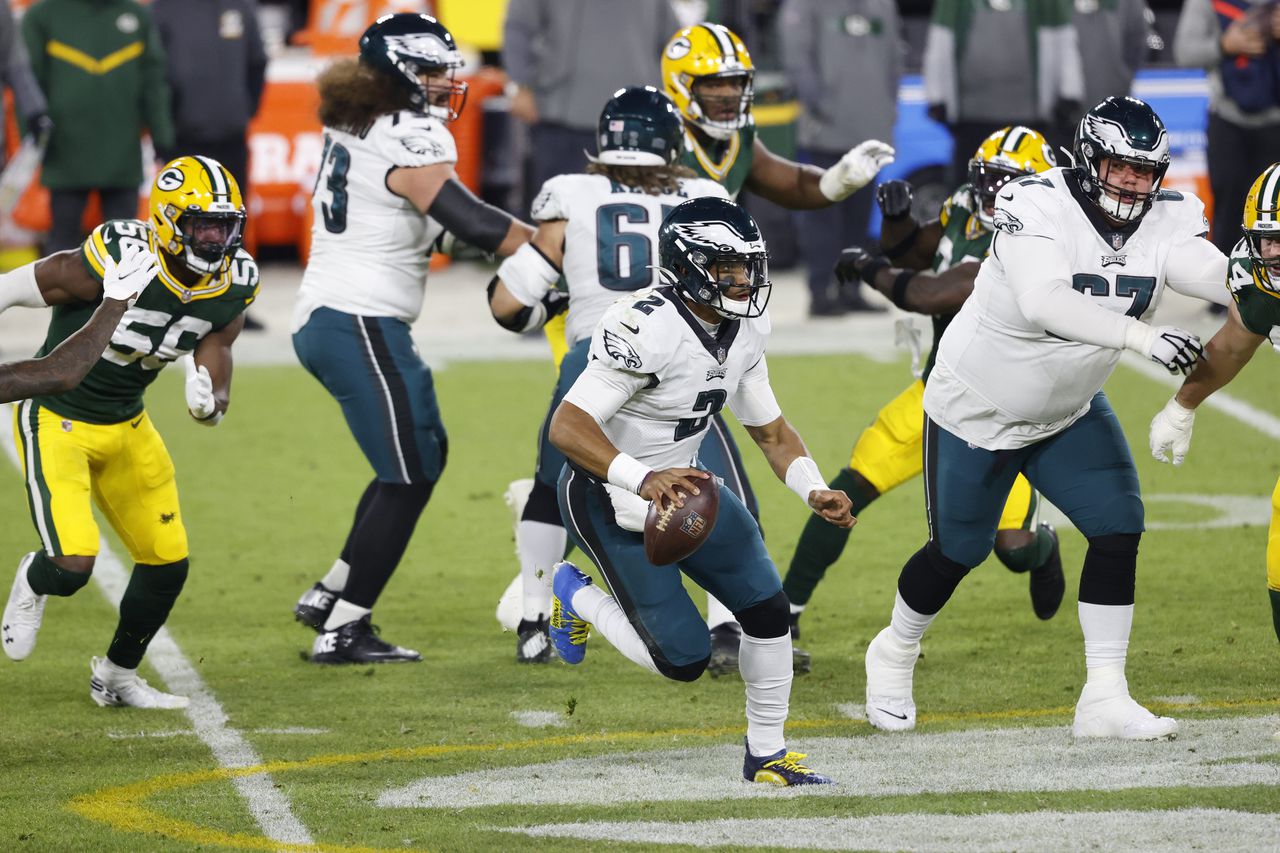 A few weeks ago I wondered aloud if the Eagles had hit rock bottom. I argued they likely hadn’t. This is officially rock bottom. I think. (AP Photo/Jeffrey Phelps)

I apologize if this week’s Birdfeed doesn’t flow, but it’s hard to make sense of where this team is at, what they’re doing, and more importantly; where they’re going. Onto my ramblings…

It was time. Carson Wentz wasn’t getting better. In fact, he was getting worse. A coach’s job is not only to do whatever he can to help the team win, but also to care for his players. Throwing Wentz out there for another week would’ve been cruel at this point. As I’ve said countless times before, Carson Wentz isn’t the reason the Eagles offense is a disaster. He’s a product of the Eagles offense being a disaster.

I also find it hilarious that Doug Pederson moved Jalen Hurts out of the pocket on several of his first attempts after being inserted into the game. He then talked this week about making sure to help Hurts with rollouts and relying more heavily on the rushing attack. Ummm hello? That’s exactly what you should’ve been doing with Wentz after the Rams loss way back in Week 2. Pederson also mentioned not playing Jason Peters and Alshon Jeffrey as much down the stretch as they deal with “injuries.” Okay, Doug. NOW you start doing things that make sense.

These are the simple things many of us have been clamoring for over the last three months. It’s infuriating. Pederson’s offense is a mess, his coaching decisions don’t add up, and he refuses to lean on a rushing attack totally capable of carrying an offense. But whatever, keep blaming Wentz, because most human beings that have played football at a high level all their life just all of a sudden forget how to do so at the washed up age of 27.

Please enjoy this clip of Dougie describing Wentz back in the day. Even Doug knew he had one job and one job only and he still failed at it.

With that said, I am rooting for Jalen Hurts this Sunday. I think he’ll add the spark Pederson is hoping for and the offense will look a bit better. Hurts making quick decisions should alone improve the offense. However, I think Eagle fans should prepare themselves to be disappointed. Hurts’ final five attempts against a Packer defense that was forced to try again were a likely window into what is in store this week against an even better Saints defense. Hurts went 1/5, got sacked twice and threw an awful interception over the final two series in Green Bay. I doubt he’s a long-term answer at quarterback, which brings us to the most important question…

What exactly was the ideal scenario after taking Hurts in the 2nd round last spring? Is there one? Wentz playing at an MVP level and Hurts never seeing the field? Seems like a total waste of a high pick. How about Wentz being a disaster and Hurts taking over to close out a miserable season? So you’re telling me you spent a 2nd round pick on someone to replace the guy you committed over $100 million to, complicating the future of the team? Not to mention the added pressure and scrutiny the pick placed on the guy you committed that money to while ALSO not adding talent to positions that will see the field and thus improve the team. I think the ideal situation for this pick, and I use “ideal” very, very loosely, was Wentz, while playing well, getting injured for a stretch throughout the season and Hurts holding the line well enough to keep the season alive until Wentz’s return. Still not worth a  2nd round pick when players like Jeremy Chinn and impact receivers were still available, but I guess that was the rationalization for the pick.

So where should the Eagles go from here? I think there will be a market for Wentz. It won’t be a great haul, but I think the Eagles can get a couple of mid round picks or maybe even a 2nd for Wentz if a bidding war between needy teams breaks out. Trading Wentz commits the Eagles to sucking for 2021 though. They won’t have cap space, their roster is aging and nearly talentless, and no draft pick, regardless of how high will turn the team around in one season. In fact, no draft pick will likely impact the team as long as Howie Roseman is calling the shots. If Jeffrey Lurie really wants to fix his franchise, it starts with Roseman being shown the door. Keeping Pederson makes more sense than keeping Howie. Even a new coach can’t make lemonade from a batch of rotten apples.

The other option is to hold onto Wentz, hoping 2020 was a fluke. Bring him a new coach and coordinator, improve the team via the incoming high picks (again, firing Howie is a must) and hope you have yourself a top 10-15 franchise quarterback who will be 28 on a team friendly deal. Unless Hurts shows out like 2010 Michael Vick, I think this is the route I would take. It’s never a great idea to sell low, and it’s not like the Eagles are a quarterback from contention anyway. The road to redemption for the Eagles and for Wentz is a long one. There are no shortcuts or easy bypasses. Roseman built this mess. You can’t let him be the one to fix it.