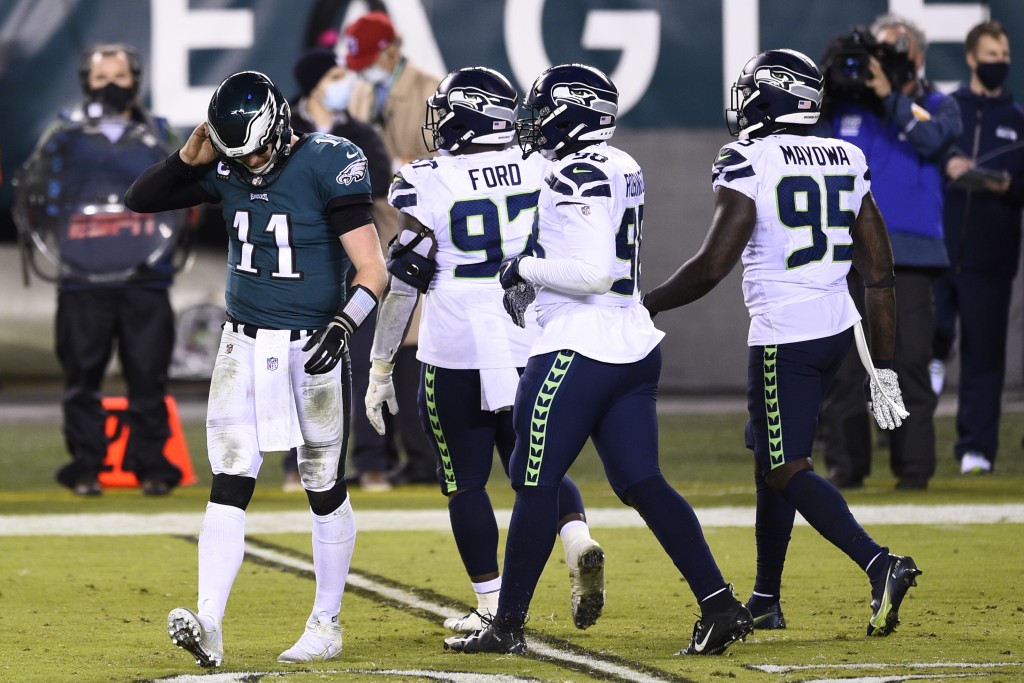 The Philadelphia Eagles are a rudderless vessel in heavy seas with no respite in sight. It’s time to abandon ship. (Photo by AP Photo/Derik Hamilton)

The way I see it, the Eagles cannot bring both Carson Wentz and Doug Pederson back for the 2021 NFL season. One must go. It should be Doug.

This is not a defense of Carson Wentz. He’s contributed plenty to this season’s worth of heaping garbage, but Wentz is also the result of Pederson’s failures as a coach, coordinator and talent evaluator.

A coach’s job is to put his players in the best position to succeed. Plenty of coaches in the NFL find ways to win games without an All-Pro starting quarterback. Not every team wakes up with an Aaron Rodgers or Patrick Mahomes under center. Look at the Cleveland Browns.

Baker Mayfield has not lived up to his number one overall draft status. Yet he has played well enough to put the Browns on the verge of the playoffs for the first time in ages. How did Mayfield do this? Well, he didn’t. His coach put him in a position to succeed.

Cleveland relies heavily on the league’s top rushing attack. The ground game moves the chains and controls the game. In 2 of Cleveland’s 3 losses, the score got away from them and they were blown out. Mayfield can’t carry the offense and move the team downfield with big plays. He’s turnover prone when leaned on too heavily. Because of this, his coach protects him and uses his strengths (agility, athleticism) to move the offense. Rarely does a big play in the passing game come when Mayfield is in the pocket.

Wentz gets none of this help. The Browns have Nick Chubb, who is averaging 6.3 yards per carry (1st among running backs in the NFL). Miles Sanders is averaging 5.6 (2nd in the NFL among backs). Sanders has fewer carries than Chubb despite playing in more games. Chubb shares a backfield with another star back in Kareem Hunt. Sanders shares a backfield with castoffs Boston Scott and Corey Clement. Why Pederson refuses to feed Sanders the ball will never make sense to me.

It’s no secret Wentz leads the NFL in interceptions and sacks. Despite those numbers, Pederson threw the football at a 4 to 1 ratio Monday night. His quarterback was sacked 6 times and hit 12 more. There were nine carries (NINE!!) by Eagles running backs in a game that didn’t get away from them until the final 5 minutes. Look at this way… I love my kids. I want them to succeed in life. Do I think they’ll improve as swimmers by throwing them in a swamp with alligators? Or in the ocean during a storm surge? Of course not, but that’s what Pederson has done with Wentz this season with devastating consequences.

Wentz has no confidence left. He is a broken quarterback. When a quarterback is hit as many times as Wentz has been lit up this season, the quarterback’s internal clock no longer functions properly. He can’t read defenses because he knows the hit is coming. When he actually gets protection, it doesn’t matter because his clock is already anticipating a hit even if one isn’t coming.

Go visit an abused dog. Raise your hand near the dog and the dog will cower. You’re not there to hit the dog, but the dog doesn’t know that. His life experience has taught him to react as if every raised hand meant pain. Every drop back at this point in the season is expected pain for Wentz. Would I like him to forget the pressure, read the defense better and find the open man? Absolutely. He certainly could do better. Unfortunately, his pocket presence/timing won’t improve until he gets time and protection on a regular basis, thus allowing his internal instincts and clocks to default back to normal.

Even Pederson’s decision making has been a disaster in 2020, both on and off the field. He’s obsessed with Jalen Hurts packages that don’t challenge the defense in any way, shape or form. He attempted to convert on a 4th down in field goal range Monday night while down 11 with over half of the 4th quarter remaining. Is Doug aware the Eagles have the 4th worst 4th down conversion rate in the NFL this season?

Furthermore, Doug continues to play aging veterans with no talent or future like Alshon Jeffrey and Jason Peters instead of promising young players like Travis Fulgham, John Hightower or Nate Herbig. It’s also been reported that he leaned heavily toward drafting Jalen Reagor over Justin Jefferson despite the Eagles scouting department all pointing to Jefferson as the better player. Pederson didn’t see Jefferson being successful on the outside. A word of advice for you youngsters: Drafting need over talent early in the draft will almost always blow up in your face.

Let’s face the cold, hard truth together. The 2017 season was Frank Reich’s title. Doug has been riding the wave since. In the three seasons since the championship, the Eagles offense has been painfully mediocre, lacking any identity. They can’t run screens. They don’t pound the football. They don’t throw deep. Big plays are scarce. There’s no threatening talent on the outside. Pederson is supposed to be an offensive genius, but his offenses haven’t been close to the potent unit helmed by Reich in 2017. His scripted plays to start games do little. He can’t adjust. If you can’t protect him, why not put Wentz on the move more often? Why not take shots downfield? Wentz is not the reason for the Eagles inept, lifeless offensive scheme; he’s the product of it.

Wentz is still salvageable. It’s the architect that must go.