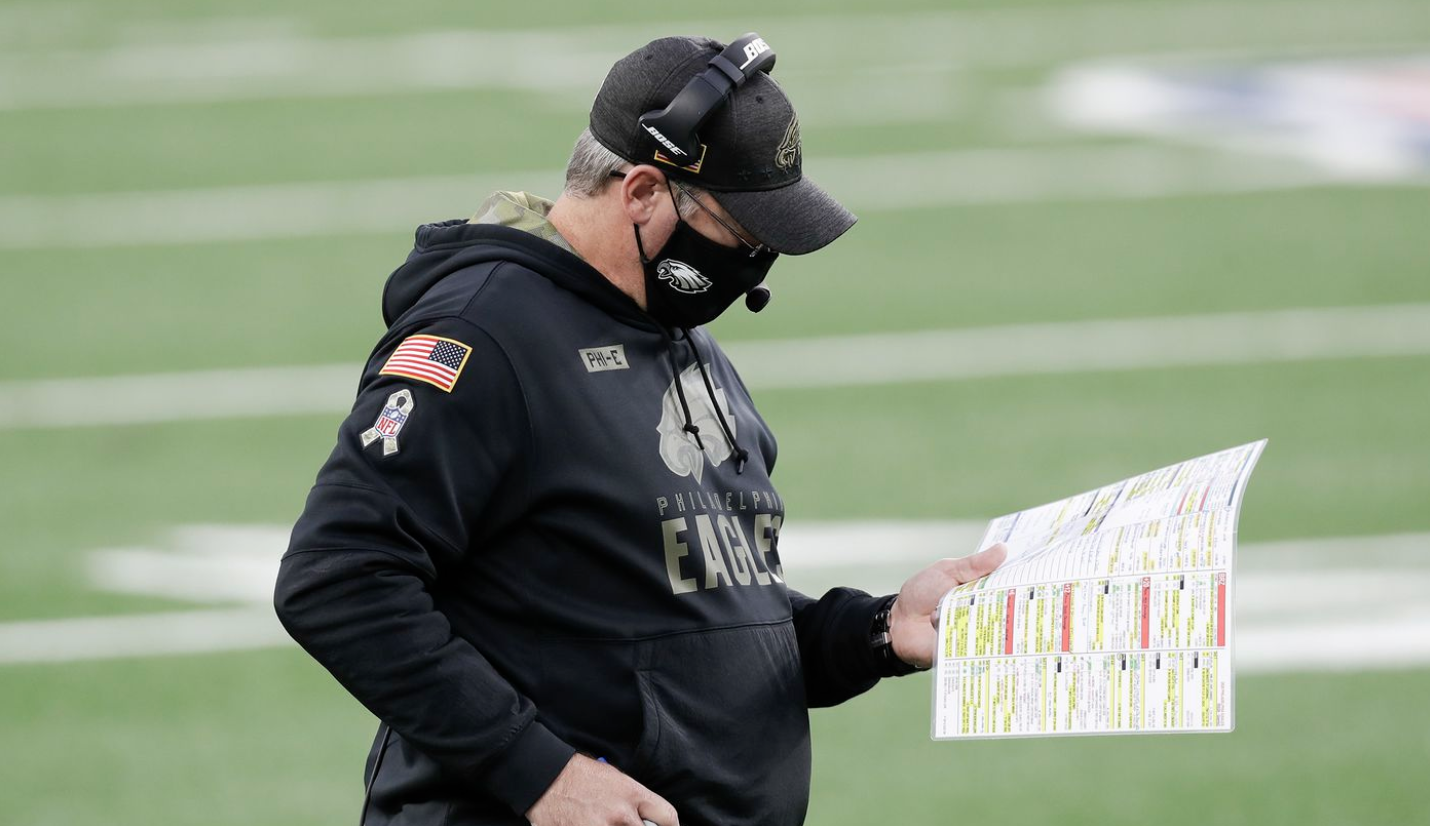 Doug Pederson’s play calling was in a self-proclaimed rhythm in a loss to the Giants. The rest of us heard rhythmless blues. (Photo by YONG KIM/ Inquirer Photographer)

Pederson believing he called a good game Sunday against the Giants is the equivalent of me believing I had a healthy day of eating because I only had fast food once. Here are some examples of why Doug’s offense was a disaster Sunday.

First… and this is a weekly trend… Doug ignored the ground game. Maybe not to the extent he had in recent weeks, but when your pass/run ratio is 62/38 and your team averaged nearly 7 yards per rush then yes, you’re ignoring the run. This was the 3rd consecutive game Miles Sanders averaged at least 5.7 yards per rush and finished with 15 or fewer rushes. How can that keep happening? Why do you hate Miles, Doug? Why?!?!

Second, the Eagles punted on their last three drives of the first half and were held scoreless on their last four drives of the second half. Doug must not like adjustments. Maybe we value different things, but being able to adjust your offense to defensive adjustments is a pretty large piece of successful play calling. And maybe I’m giving the defense too much credit here, because maybe Doug is just killing himself.

For example, after the Eagles marched down the field for touchdowns on back-to-back drives to open the 3rd quarter, they had a chance to take the lead on their next drive. On 1st down Sanders rushed for a 1st down. Good, let’s keep riding Sanders. Nope. Incomplete pass on 1st down. On 2nd down, another worthless option to Jalen Hurts for -1 yards. Another incompletion on 3rd and long. Nice.

Third, go watch the game film and you’ll see Doug’s favorite call of the day was having most or all of his receivers run 7-10 yard curls. See?… 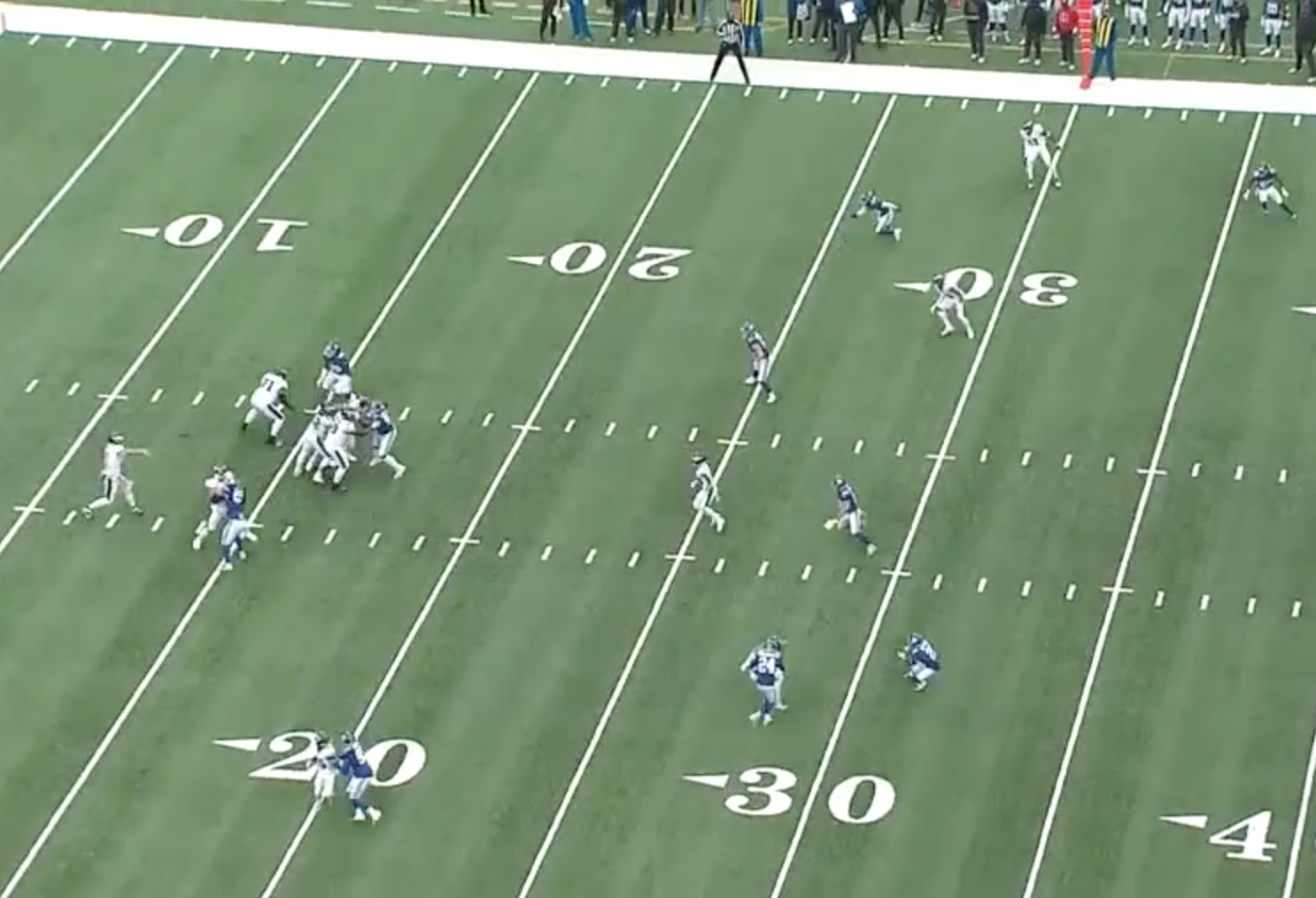 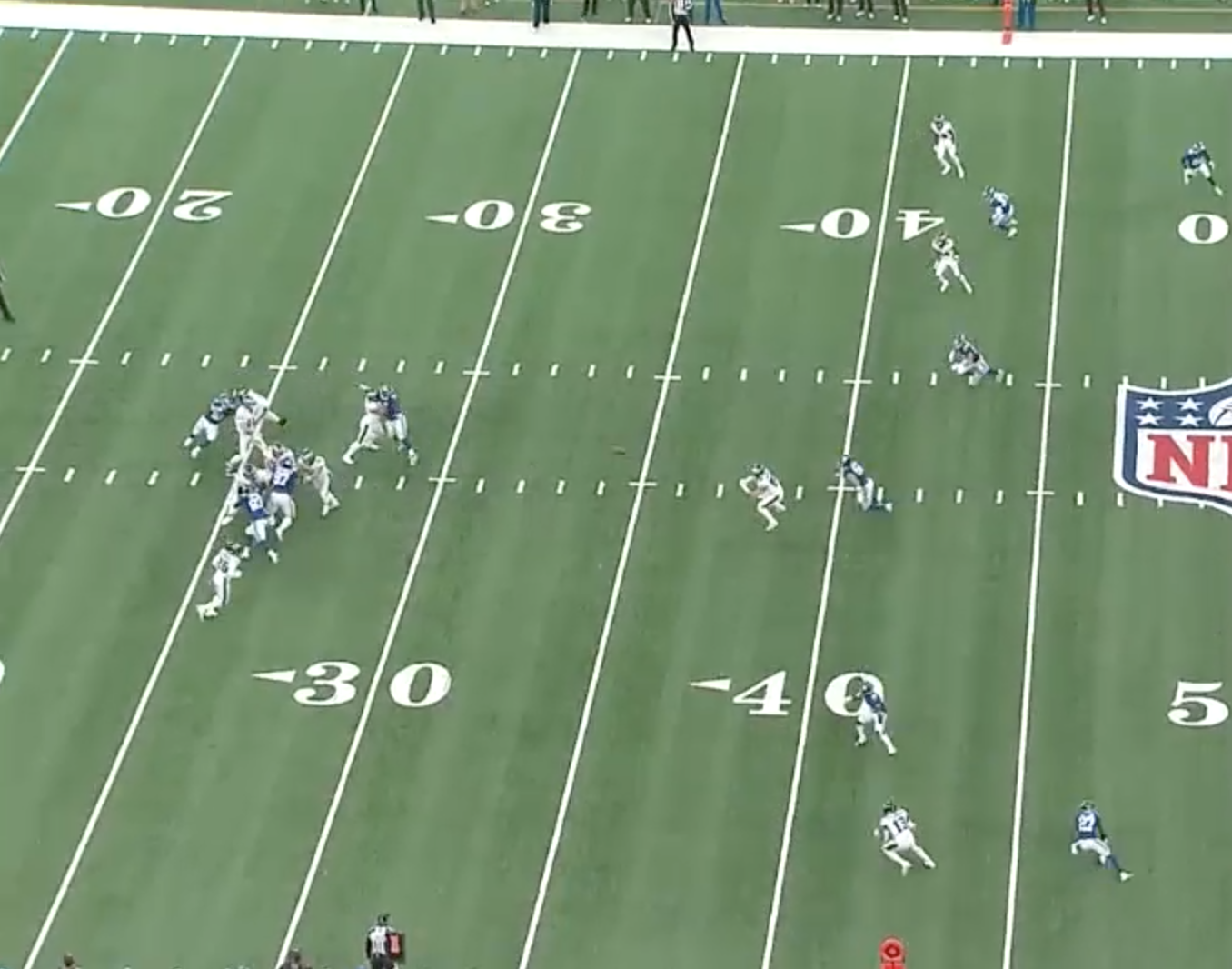 This happened over and over again throughout the afternoon. The offense only sent a receiver deeper than 15 yards on a few occasions. I understand the defense was sitting two safeties over the top, but neutering your offense plays right into the hands of the defense. Challenge the defense; make them play the whole field. You went out and drafted three speedsters to stretch defenses and only one of them saw the field Sunday. This leads me to my next point…

Fourth, please, Doug, take your 12 personnel, tie it to a cinder block, and throw it in the Schuylkill right now. It’s been almost three full seasons of this nonsense and it is absolute trash. The Zach Ertz injury was supposed to free the offense from this madness. Instead of young players like John Hightower or Quez Watkins getting reps, Richard Rodgers is out there as the second tight end. It doesn’t work. Please stop. And while we’re here, the decision to let Alshon Jeffrey back on the field AND then double down by saying his playing time will increase is just a** backwards at this point. He stinks. You stink. Your team stinks. Keep Travis Fulgham on the field. Give the rookies reps, not Jeffrey. Sadly, Doug won’t start to develop players for tomorrow until the reality of today punches him square in his face. Who knows when that will happen, if ever.

Finally, why was Carson Wentz sitting in the pocket Sunday? I thought we all decided getting him on the move was ideal? Wentz wasn’t perfect Sunday, but the plan was for him to play within the offense and eliminate the “forcing it” plays. He did that and the offense was dreadful for all but three drives.

While we’re on Wentz, I feel somewhat bad for him. There is no one open. Yes, part of being an NFL quarterback is throwing the ball to places where covered receivers can catch the football. I get that, and Wentz needs to be better there. On the other hand, think about how throwing to covered receivers has worked out for him this year. Eagle receivers don’t make plays on the ball. When the Giants responded to the Eagles touchdown out of the half by scoring after four plays it was entirely due to their receivers making exceptional plays for the football (and Eagle corners being inept at playing the ball). Fulgham does that at times, but no other Eagle receiver wins those battles. Like I said before, Wentz wasn’t perfect. He missed Jeffrey high on the first drive. He missed a streaking Dallas Goedert early in the 4th that would’ve erased a 2nd and 18. But perhaps his biggest miss of the day was on 2nd and 10 at the NY 36. The Eagles trailed by 7 with a little over 5 minutes remaining. As you can see below, Fulgham has the corner beat and there’s a window for Wentz to get him the ball before the safety closes. 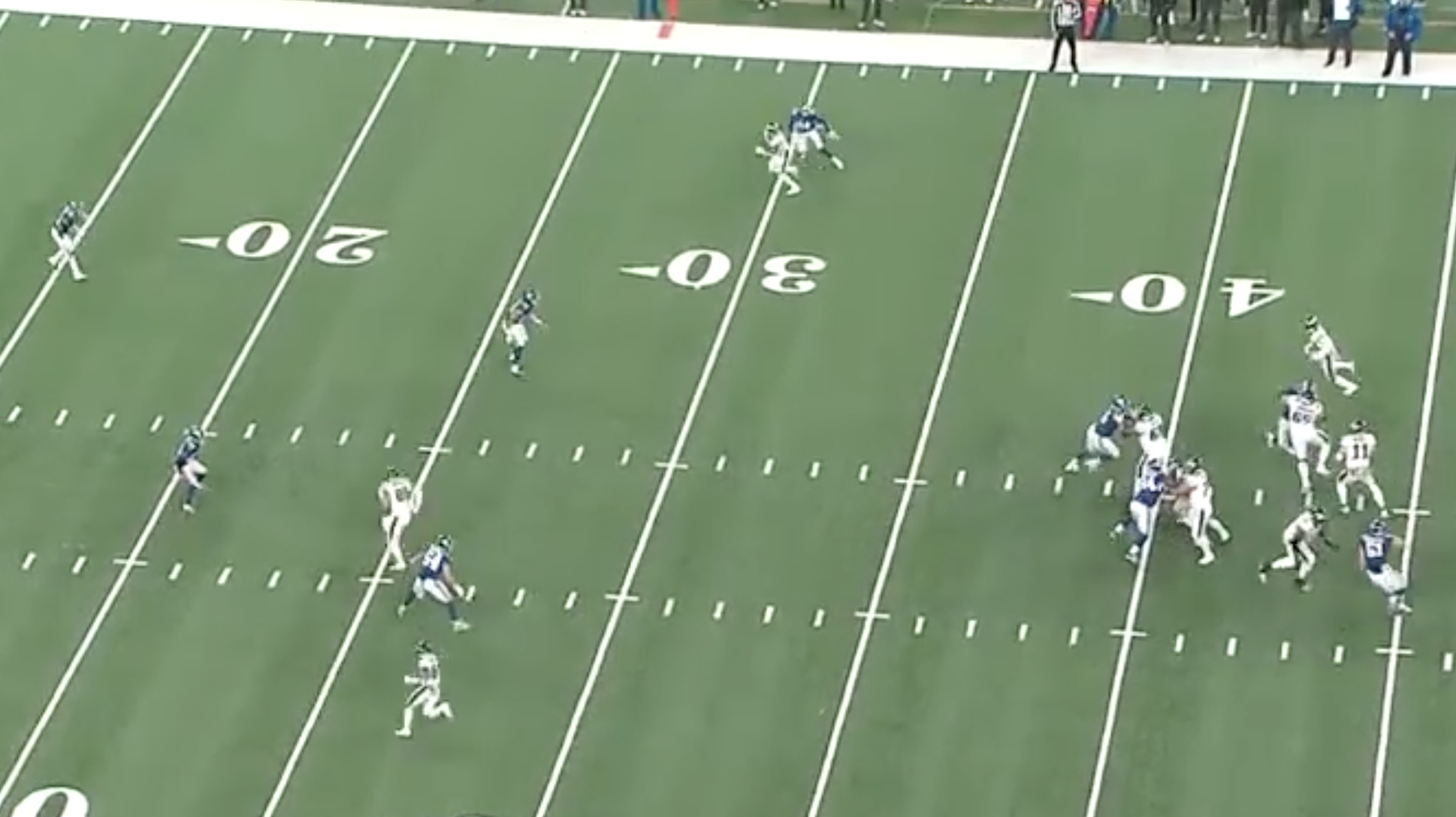 Wentz instead takes the dump off to Sanders who ended up dropping the pass. The Eagles would then fail on 3rd and 4th down. Curtains.

Before we go, the defense was even worse than the offense Sunday, but I don’t have the energy to describe in detail why they stunk or why Jim Schwartz should be fired today, tomorrow and yesterday. I will say that it was amazing to see the linebackers play as if they had no idea Daniel Jones could or would run with the football. Even after he rushed for over 100 yards against them last month, the Eagles played like Jones was a statute in the pocket. Anyway, I don’t think there’s a better pair of screenshots to explain the defense’s performance last Sunday than the two below, taken 1 second apart. As you can see, the defense is in great position. Four guys to cover three… 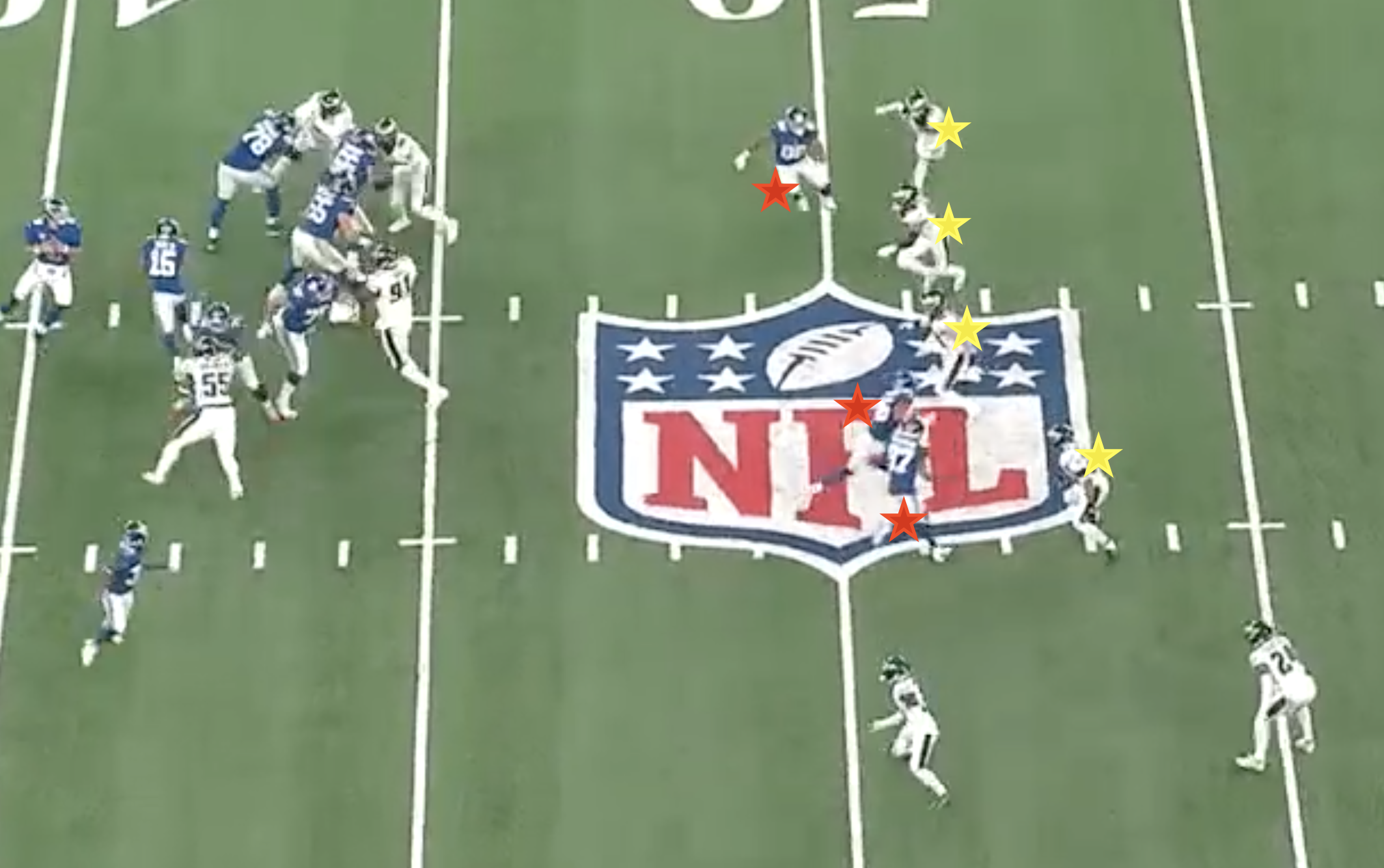 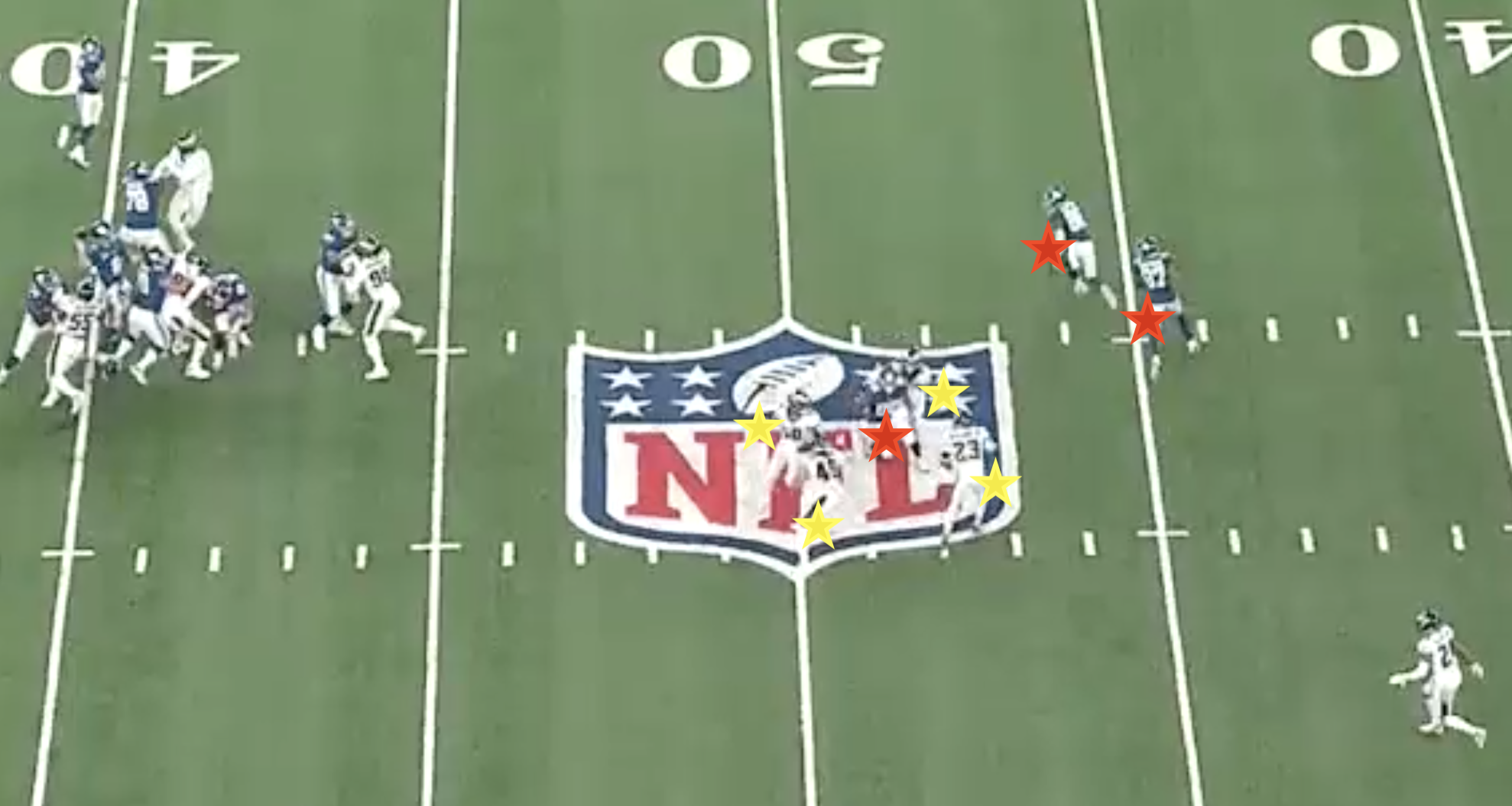 We stink. I’m sad. Fire everybody.