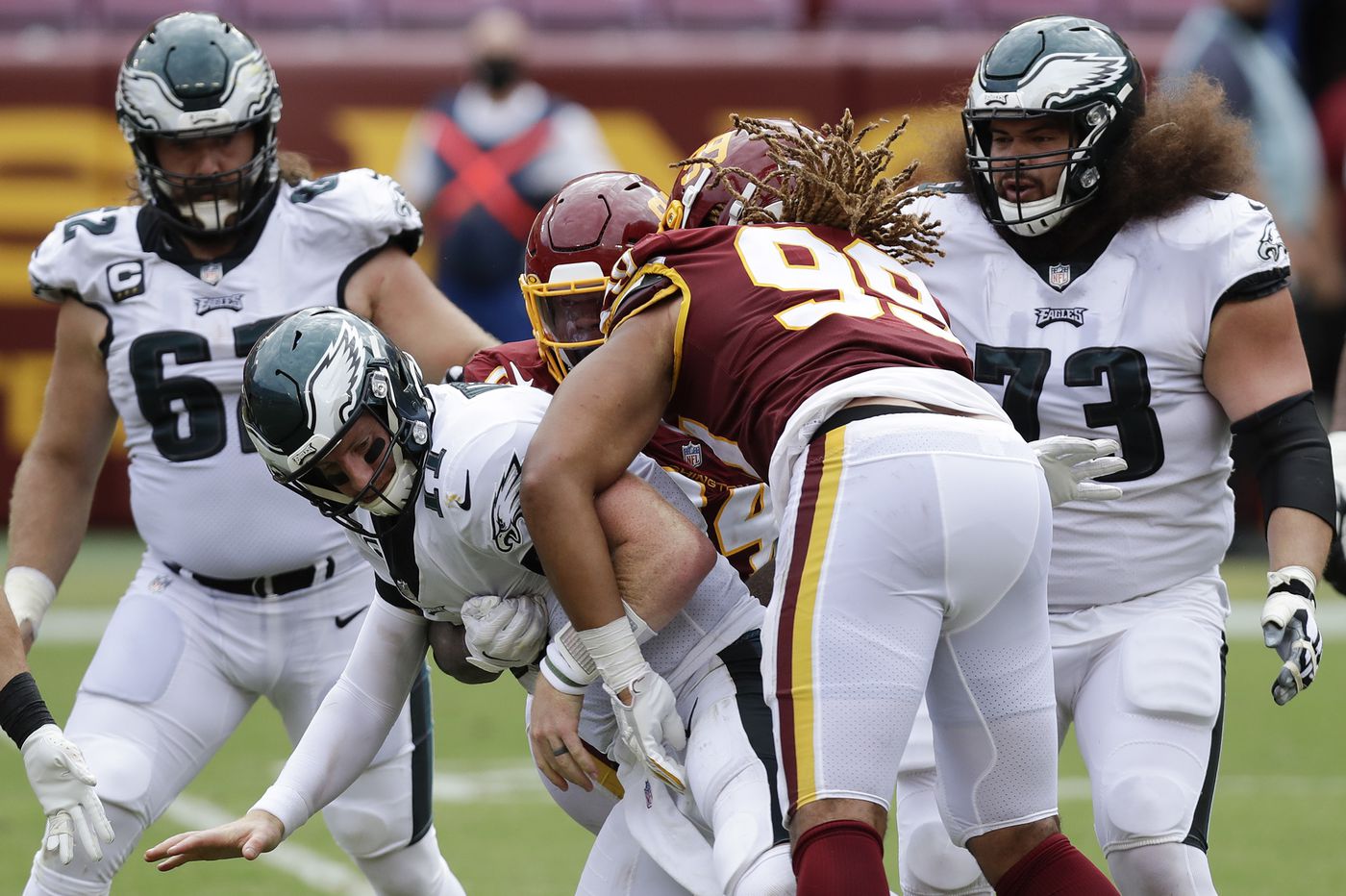 Losses are the worst, and yet, it feels so good to feel the pain again. (Photo by YONG KIM / Phila Inquirer PHOTOGRAPHER)

Sunday’s loss was a cruel reminder of the pain of football. No, I’m talking about the physical beating players take. I’m of course talking about the gut-punching losses and the emotional roller coaster of being an Eagles fan. Sunday had it all.

First, the Eagles are rolling, up 17-0. The Eagles have a deep threat again and Carson Wentz looks like 2017 MVP Wentz. 16-0 is definitely happening. A Super Bowl date with Patrick Mahomes and the Chiefs is inevitable. The Eagles get the ball with under 2 minutes left in the 1st half and will receive the 2nd half kickoff. 31-0 is a realistic possibility, but I’ll settle for 27-0, I say to myself.

Death, taxes, and the Eagles crushing your soul… and man does it feel so good.

After months and months of pandemic bleakness, the country burning both literally and figuratively, it was nice to feel fun, unimportant pain again. The kind that brings a little wry smile as you sit there suffering. Football is back and it is awesome. Even if the Eagles are not.

You may think losing to a nameless football team is the end of the world. While it certainly felt like so, the Eagles shall prevail. I’ve talked myself off the ledge and decided to share three reasons why the season isn’t lost after just one game.

1. Injuries had the Eagles missing 2 defensive starters and 5 on offense. (Yes, two of those offensive starters are gone for the year, but shhhh.) Miles Sanders became a huge part of the offense when the Eagles got hot in 2019, so his absence was a gapping hole that can’t be filled by just any back. Lane Johnson can’t play right tackle and right guard, but his presence will stabilize the outside and offer more flexibility in limiting pressure from the right.

2. Wentz looked really good before the pressure and hits started mounting up. Yes, those two things are part of the game, but I’m going to assume (and pray) 8 sacks and 14 quarterback hits won’t be a weekly occurrence. With more chemistry and better play-calling (come on, Doug), Wentz should have his wits about him and be more comfortable as the season progresses.

3. The defense was really good. Wentz and the offense put them in some tough spots, and they were clearly gassed late in the game, but they limited Washington to 239 yards and less than 3.5 yards per play. Not every offense will be as limited as Football Team’s (haha), but it’s a nice start to build on for a unit with a lot of new faces in new places.

1. Seriously, Doug. Your offensive line is Swiss cheese, your QB is getting assaulted and you don’t change up the play-calling? Like, at all? Roll Wentz out, move the pocket, add protection, eliminate 5-7 step drops, call more screens or RUN THE BALL. Doug is like Andy Reid. They forget how important a run game and more balanced attack is to an offense until late November EVERY SINGLE SEASON. It’s not illegal to run the football in September and October, Dougie.

2. The defensive line was supposed to be our bread and butter. Instead, they were MIA after the first 20 minutes Sunday. Is Fletcher Cox on the team right now or does he just not show up until December anymore? I get they were down two starters but that unit is too talented not to wreck offenses. I forgot Brandon Graham was even on the field until he got concussed.

3. Uhh, it’s year 5, Carson. Can we bail on a busted screen like every other quarterback in the league? It’s okay; just throw it at Goedert’s feet. 2nd and 10 is better than 2nd and 16. You can do it. Also, throwing the ball away is acceptable from time to time. Conversely, missing receivers by airmailing it 7 feet over their head is not okay and makes us Eagle fans have violent flashbacks to the McNabb days. Please don’t do that.

Bonus: Remember that 2nd round pick we spent on Jalen Hurts because the Eagles are a forward-thinking organization and Hurts can add something revolutionary to the offense? Yeh, he was inactive Sunday.