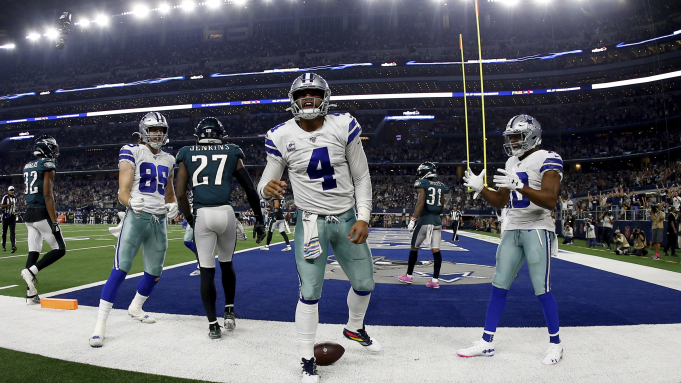 The Eagles have a plethora of problems. One appears to be locker room dissension. The Seattle Initiative must be considered. (Photo by Ron Jenkins/AP)

Aside from a four week stretch in late 2018/early 2019, nothing has gone smoothly for the post-Super Bowl Philadelphia Eagles. There are too many narratives floating around as to why the Eagles stink to discuss all of them, so let’s focus on the biggest and most flawed one.

Carson Wentz is the problem. I don’t understand how anyone watches the Eagles and believes Wentz is the reason the Eagles are 3-4 and floundering. Aside from the Dallas game last week, Wentz has been the Eagles best and most productive player. Only RG Brandon Brooks has an argument. It’s also worth noting Wentz is getting zero help on the outside. The Eagles were widely considered to have one of the deepest receiving groups in the NFL entering the season. Without Desean Jackson for all but one game, they’ve proven to be among the worst. They’re among the worst in drops, production and bad attitudes. Watch Nelson Agholor just give up on this very catchable deep ball last week in Dallas.

Coaches Film on the infamous Agholor play…it was an easier catch to make than we thought!!! 🤬🤬🤬 pic.twitter.com/prViQQu28M

Here’s Agholor dropping a game-winning touchdown against the Falcons.

When watching this play live, I thought it was a miscommunication between Oliver and Neal. While Neal should be more aware of the coverage and drop deeper, Oliver can't allow Agholor to accelerate downfield so easily. What a break for the Falcons. pic.twitter.com/UPW39bI13G

Drafted for these types of jump ball situations, JJAW's gotta have it – pic.twitter.com/N2Lvh5gbYp

Here’s Alshon Jeffrey running out of bounds instead of scoring to tie the Vikings at 24.

At this point it's just silly. Carson gotta run it in for 'em too. Would've tied the game 24-24 had Jeffery ran in a straight line. pic.twitter.com/6RLvhpCOJM

Wide receivers haven’t made plays. What’s worse, they’re the ones complaining to the media as “anonymous sources” and pointing fingers elsewhere. It’s embarrassing. Nothing is more cowardly and detrimental to a locker room than “anonymous sources.”

Let’s also not forget Wentz is only 26 and in the midst of his fourth season in the NFL. I won’t bore you with stats, but let’s see where other franchise quarterbacks started hitting their respective strides.

Tom Brady – Turned into the Brady we all revere when Randy Moss came to town. Brady was 30 at the time and in his 8th season. Since the age of 33 (11th season), he’s been nothing short of amazing.

Drew Brees – Started somewhere between age 27 and 29, depending on your definition of a great season. At age 27 he was in his 6th season. He’s been pretty spectacular every season since age 32 (his 12th season).

Peyton Manning – Manning’s stats from his early years weren’t great. We can debate rules, style, offenses etc… and those are certainly reasonable arguments I’d probably agree with (same for Brady and to a lesser extent, Brees), but Manning’s best seasons started at age 28 (7th season). He was a legend until his arm literally became a noodle.

Russell Wilson – Was great in his 4th season at age 27, struggled the following season and has been awesome since. He’s currently having his best year at age 31 (8th season).

Again, Wentz is only in his 4th year. His prime is at least two years down the road. If he’s able to stay upright, that prime should extend 5-7 years after that. It’s absolutely absurd that Wentz is the Eagle being raked over the coals the past two seasons.

After going to back-to-back Super Bowls, the Seattle Seahawks found themselves in a precarious situation. They had their franchise quarterback of the present and future, but there was dissension among the ranks, especially on the defensive side of the ball. Seahawk leaders, who were also all-pros, had issues with Wilson and his standing within the franchise. It’s all out there on the interwebs, so I won’t detail everything here. Just know the Seahawks were wise and showed notable defensive legends the door and committed themselves to Wilson. Essentially, “This is our guy. If he’s not yours too, there’s the door.”

Just as Seattle went all in on Wilson by moving Wilson dissenters, there may come a time when the Eagles must do the same. Hopefully, Jeffrey Lurie, Doug Pederson and Howie Roseman have the courage to pull the trigger. Empty the locker room of anti-Wentz players, regardless of status or contract.

Wentz is the future. Wentz is the franchise. Wentz is where the hopes of another 2017 lie. There’s literally no one else on the team worth considering over Wentz. Not an aging safety. Not mediocre receivers. And certainly not a cowardly “anonymous source.”