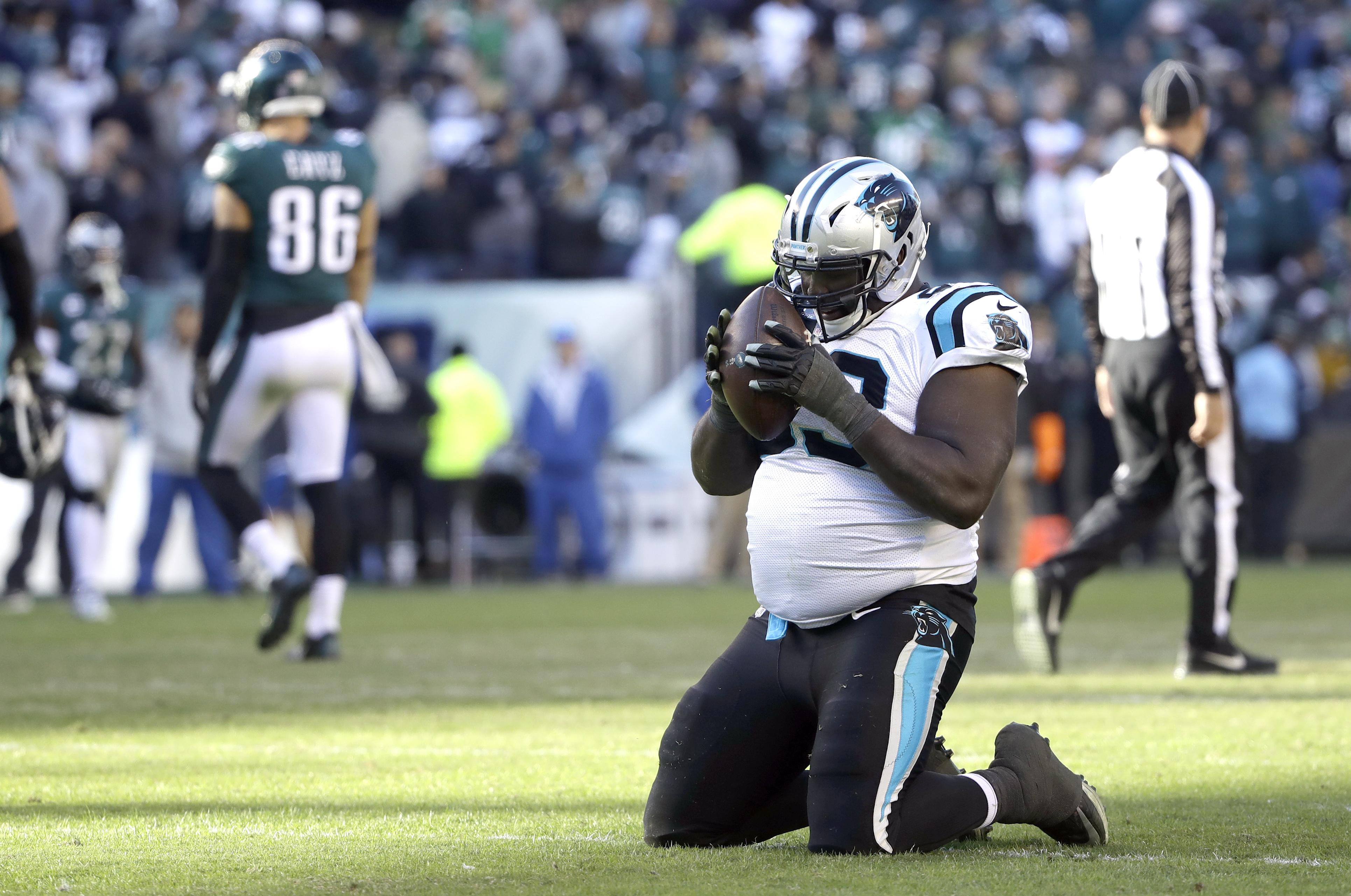 The Eagles are excellent at losing. (Photo by Matt Rourke / AP)

[WARNING: What is below is the ramblings of a wounded fan. I’m not even sure it’s coherent. It’s just ramblings. My apologies.]

Ever play on a competitive sports team? Or gamble on an athletic event? If so, you know the joys of winning never match the pain brought on by losing. You’ll remember your 5 worst losses more vividly than you will your best win.

The 2017 Philadelphia Eagles season was mostly a dream. Aside from some significant injuries, the Eagles crushed opponents and won the Super Bowl after an impressive underdog run through the postseason. Eight months later, the pain of struggling to a 3-4 start feels worse than the joy of going 13-3.

There are plenty of reasons to still believe in the 2018 Eagles, and we’ll get to them shortly, but the soul of a team can only handle so much disappointment before it throws its hands up and surrenders the season. Blowing a 17-3 3rd quarter lead to the 3rd worst offense in the league was shocking. Blowing a 17-0 4th quarter lead at home in only 10 minutes is downright inexcusable. Doug Pederson’s bizarre quotes after the game certainly didn’t help matters.

“Pressure’s off,” he said. Huh? I thought being the best, and remaining at the top of the sport was supposed to be the “new normal.” I guess it makes sense why the Eagles can’t get their act together on the field. Apparently they can’t get their mantras in line either. Are the Eagles supposed to maintain the standard of 2017 or are they not being held to that standard any longer? If the “pressure’s off,” then they’ve already fallen short of their biggest offseason selling point. That’s not very encouraging.

It’s also clear after two months this team is not as “invested” in 2018. The confidence is lacking. There is absolutely no swagger from the defense. There comes a point where missed tackles are less about ability and more about pride and hunger. The Eagles defense lacks both, especially in the 4th quarter when protecting leads. Even Carson Wentz looked terrified on the Eagles final two drives. I’ve never seen Wentz get caught up in the moment like that. He wasn’t playing loose; he was aiming and fluttering passes. He arguably was picked off once and should’ve been picked the very next play. Let’s all hope that was a fluke and not a sign of things to come. Up until those final drives, Wentz was the only bright spot of the 2018 season. I’m going to be sick.

As bad as things are, though, the Eagles are right there. It’s funny how narratives change based on the tiniest of moments. If the Eagles get off the field on 4th and 15 and 4th and 10, they’re 5-2 and many would consider them a contender to repeat as NFC Champions. Instead, they’re already being written off as any kind of contender in January. Two plays. That’s all it takes to flip your season on its head.

I shouldn’t be all that surprised. I offered a warning before the season that entering the bye 4-4 was a real possibility. Of course, I was considering Nick Foles playing a majority of those eight games and wasn’t expecting blown leads and horrific defensive play to be issues. Though I had prepared myself for the worst, the way it’s happened has been traumatic.

Back to hope… after Jacksonville, the Eagles play five of their final eight against the NFC East. Though the division isn’t quite as awful as many would have you believe, it’s still not great. The Eagles can easily grab control of their own destiny by simply beating lesser teams in the division. I don’t think we’re at the point where we need to compare schedules and predict wins/losses, but it’s a lot closer than it should be for a team as talented as the Eagles.

Moving forward, I think the fixes are fairly obvious. The running game must be more consistent. At times the Eagles offense has looked as dominant as it did a year ago. Against Carolina on Sunday, the Eagles went 94 yards on 17 plays and ate nearly ten minutes off the clock on their first possession of the 2nd half. They had similar drives against the Colts and Titans. All three of those drives relied on a healthy running game. On the Eagles two drives after taking a 17-0 lead, they didn’t run the ball once. Not a single time. I know Doug is super-aggressive, but chewing clock is obviously important there. And yes, Wentz only threw two incompletions on those two drives, but you’re at a stage of the game where the defense is exhausted and pounding them on the ground is often the last thing a fatigued defense wants to see. I’m not a 50/50 run/pass ratio guy either. Wentz is our best player. Trust him to close the game out. I get it. Not running the ball once though? In nine plays? While nursing a lead? Come on.

Not running the ball wasn’t my only issue with play-calling Sunday. Nelson Agholor had 6 receptions for 20 yards. He clearly isn’t a weapon in space like Doug thinks he is. We can stop throwing swing passes and bubble screens to a receiver that’s afraid to get hit and can’t make anyone miss. If you want to get Agholor in space, throw him the ball downfield. If you think I’m taking a small sample size, please, help yourself to these numbers;

Agholor is not Tyreek Hill. He’s not even Albert Wilson. Just please stop.

Finally, the defense. Ah the defense. It’s amazing what this defense does to lose games after being so clutch a season ago. Heck, they were clutch last month with big red zone stops against the Falcons and Colts that sealed victories. Now they can’t even force a punt in the 4th quarter. All the defense had to do was make Carolina earn it. No big plays, just keep everything in front of you. Carolina got the ball back with 6:51 to go in the 4th, trailing by 11 points. I said to myself, “just don’t let them score in less than 4 minutes. FOUR MINUTES! It’s not even that big of a request. Just show some resistance. Nope. The Eagles surrendered three plays over 14 yards and gave up the two point conversion for good measure. The Carolina drive took only 2:44 off the clock. The biggest gaffe of the drive belonged to Ronald Darby who bit on a slant and go and got burnt for the touchdown. Hey, uh, Ronald, you’re up 11 there, just protect the end zone. Please don’t worry about a five yard slant.

I recall over the offseason texting my cousin when the Giants were sniffing around Jim Schwartz. I said the Giants taking Schwartz would be great. I didn’t trust him as a smart coach and thought the defensive excellence was due more to talent than scheme. I believed the Eagles could do better. Sending him within the division would’ve have been a bonus. Sadly, it did not happen and the Eagles defense makes more boneheaded mistakes than a backup quarterback on a free weekend (hey, Chad Kelly).

Anyway, the Eagles still had another chance to clinch the game. The offense couldn’t do it. Three and out. The defense appeared up to the challenge when they forced a 4th and 10 just before the two minute warning. Michael Bennett was ¼ second late to Newton who barely got the ball to Torrey Smith. Converting was painful, but Carolina still would’ve had to go another 20-25 yards to get in reasonable field goal range for the tie. Instead, Jalen Mills missed the tackle and Dexter McDougle took the same angle a blind rat would take, missing Smith completely. The play went for an extra 20 yards and Carolina, already well within field goal range, could play for the win. Missed tackles, dumb plays, rinse and repeat.

The Jaguars are a wounded animal but are as desperate for a win as the Eagles. Nothing about the Eagles gives me confidence right now except that when the defense is needed, they will fail, and when the offense can clinch a game, they will punt.