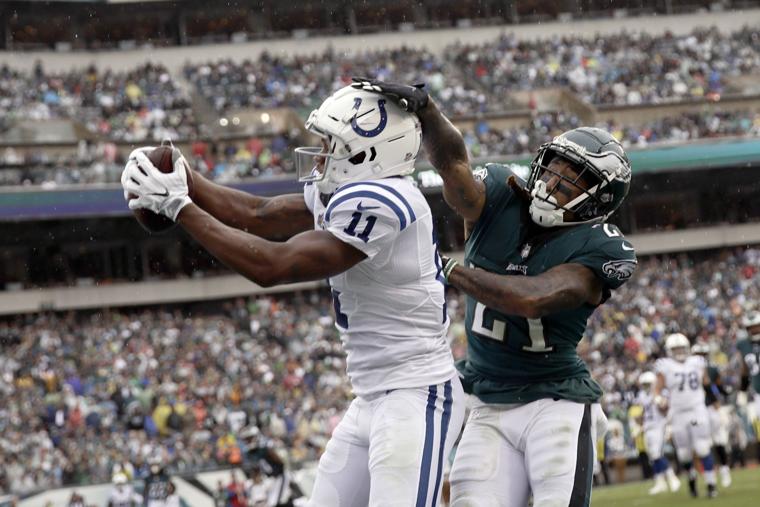 Carson Wentz returned to the Eagles in Week 3. Unfortunately, Wentz’s return was the highlight of an afternoon that matched the weather; dreary. (AP Photo/Matt Rourke)

Did the Eagles defeat the Colts and bump their record to 2-1? Yes. If you’re an Eagles fan, was there much to feel great about apart from squeaking out another ugly win? No, not really.

I understand where the Eagles are right now. I really do. It’s a Super Bowl hangover. I know Malcolm Jenkins tells us there is no hangover, but what is he supposed to say? Outside of Carson Wentz, Fletcher Cox, Derek Barnett, and an unexpected performance from Wendell Smallwood, the Eagles were dead. No energy. No urgency. No fun. Even the crowd was sedated.

You’re probably reading this thinking, “the Eagles defense was stifling Sunday and this guy is saying the team was dead.” Well first of all, you’d be right. The Philadelphia defense was dominant Sunday, limiting the Colts to 209 total yards. More importantly, the Eagles defense swallowed up the Colts offense inside the red zone (1/5) and on 3rd down (2/12). Despite their success, the defense still appeared to lack energy. There was no swagger outside of Jalen Mills’ finger wagging. Sidney Jones’ terrific tackling display aside, the tackling was again suspect, especially from Ronald Darby (again).

The offense was significantly less effective than the defense but still managed to churn out the ugliest 17 play drive I have ever seen. Philadelphia had four plays for a loss on the drive. There was a 20 yard run called back for holding and the Eagles managed to find themselves in down and distance of longer than 10 on four different down sequences. Only the Colts’ incompetence bailed out the Eagles. The Colts racked up 5 penalties that rescued the Eagles from a 2nd and 26 and nullified a stop on 4th down. Did I mention the officials failed to see Nelson Agholor’s foot clearly step out of bounds on a crucial 3rd down conversion?

Also, did anyone else have flashbacks of the wide receiver wastelands of the early 2000’s? Remember when we criticized Donovan McNabb for not putting up more points when James Thrash was his top target? Or how about a half decade later when Kevin Curtis was supposed to be a breakout star? Yeeesh. That’s what it’s been like watching the Eagles these last two weeks. Alshon Jeffrey, Mack Hollins; please heal faster.

Enough whining. Let’s drink the team cool aid and dwell on the positives.

First of all, the Eagles defense has essentially won two games on their own. In victories against the Falcons and Colts, the defense was required to stall opponent drives inside the red zone in the final minutes. In both games, the defense was also tasked with limiting the damage of 4th quarter turnovers. Philadelphia could be 0-3 more easily than 3-0.

Second, our franchise quarterback is back and looked at or darn near close to normal, at least physically speaking. Wentz could evade the pass rush, dart out of the pocket for 1st downs and still launch the ball a bazillion yards with a flick of his wrist. On the other hand, his reads were slow and he was sloppy with the football. His two turnovers deep inside the Eagles zone should have spelled disaster. Oh yeh, we’re doing positives. My fault. Back to happiness…

Third, Derek Barnett has been a menace to opposing quarterbacks thus far. I don’t know many (or anyone really) who were excited about that pick a year ago, but whoooooo can he blow up a backfield. He’s quickly becoming one of my favorite young players.

Fourth, seriously, look at what Sidney Jones does here;

If your corner does work like @SidneyJonesIV, you don’t even need 11 on the field 😤😤😤 (h/t @MichaelKistNFL) pic.twitter.com/OFRfxKjYSa

Finally, our coach is not Jon Gruden or Jason Garrett. Eli Manning, Dak Prescott and Alex Smith are the three other starting quarterbacks in the division. Even if this hangover lasts until the bye week, I think we’re gonna be okay.