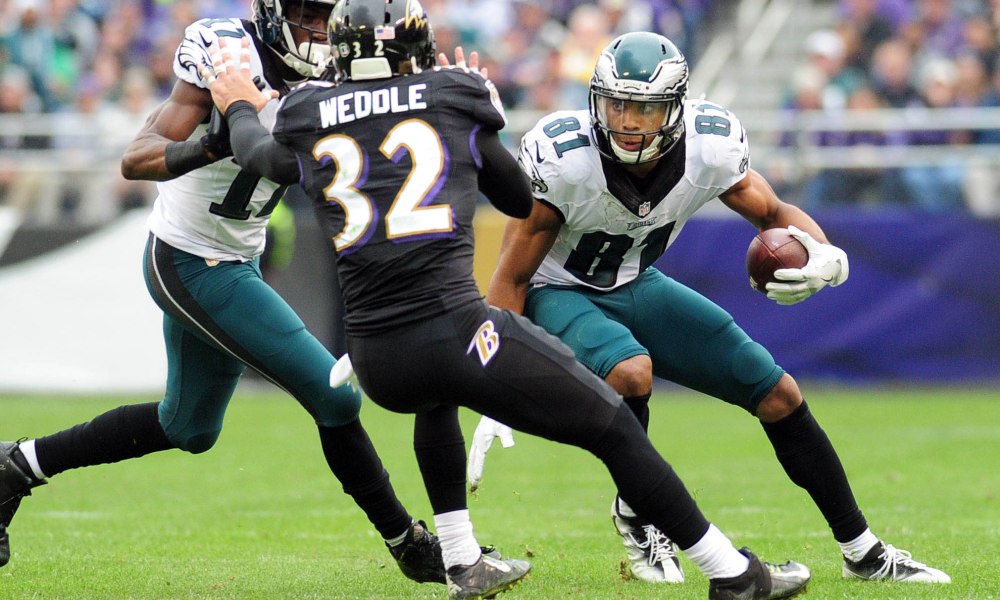 The Eagles can ruin the Giants’ shot at a top seed Thursday night. I’ll settle for another competitive performance. (Photo by USA Today)

I know that sounds stupid. Hoping your team is competitive is pretty pointless when only wins and losses matter. However, I’ve fully accepted that the Eagles are operating at a talent deficit. What’s worse, they lack talent at some of the most crucial positions. Outside of Malcolm Jenkins, the Eagles secondary is made up of backups and “practice squadders.” That’s bad news in a league where throwing the football is all the rage. Speaking of throwing the football, the Eagles have started a rookie quarterback all season. Furthermore, his receivers have proven again and again that catching the football on a consistent basis is simply too much to ask. Yes, Ryan Mathews is a starting caliber NFL running back, but only for a few weeks a season. This is probably just the Christmas spirit in me talking, but I’m not as down on the Eagles as most. If we sat down and really assessed the Eagles season one could even argue the Eagles have overachieved.

I know, I know, you just cursed me and spit at your computer. Hear me out. The Eagles have played eight of the top nine teams in the NFC this season. That’s nine games with two more yet to go. Throw in the Ravens and Steelers and that’s 11 games vs playoff contenders. While their record in such games is poor (3-8), they only lost two by more than one score and their point differential over that stretch is +1. Even if you remove the Steelers blowout win, their point differential is only -30. -30 over 10 games against playoff contenders is pretty good for a team without a proven quarterback, a rag-tag offensive line and zero talent in the passing game on either side of the ball. It’s Christmas time, people! Find the positives! The Eagles are on the right path! Sure, Dumb Dougie blew a few games with some horrific play calling and asinine decisions, but let’s focus on the good vibes for now.

I know it’s been over a month since the Eagles last won a football game. Yes, that’s somewhat hard to believe for a team that began the season 3-0 and had some folks (raising my hand) wondering if the Eagles might actually slip into the playoffs. However, despite an atrocious 2-9 record since that hot start, this hasn’t felt as horrible as other lost Eagle seasons. The 2011 “Dream Team” season was an apocalypse. Reid’s final season a year later was somehow worse. Even Chip Kelly’s farewell 2015 campaign was a tougher watch. Outside of the Seattle-Green Bay-Cincinnati stretch, I’ve actually really enjoyed this season, which is strange considering it’s been equivalent to a 15 week colonoscopy.

Anyway, the Eagles came within a two point conversion last week of knocking off the Baltimore Ravens. Obviously, the conversion failed, but it was a big deal (at least to me) to see Carson Wentz finally get that 4th quarter drive to tie or take the lead under his belt. As I’ve documented here all season, he was a huge 0 for 9 in game tying/winning situations before scoring the touchdown in Baltimore. (Yes, it was a game-tying touchdown even though it didn’t, you know, tie the game.) Also, big ups to Dumb Dougie for making the right call there to avoid overtime. It didn’t work out but it was the right call. You see?!?! Even Doug is evolving.

Now, if only the Eagles could grab that elusive first division win of the season. Tonight is the night. The 2016 season is over for Doug Pederson and Co. Tonight is the beginning of their 2017 campaign. Finishing 2-0 against the NFC East would be a nice kick start to what looks to be a promising future. All you have to do is find the silver linings in what’s been a trying season. EAGLES If I were Charles Barkley; Eagles +3