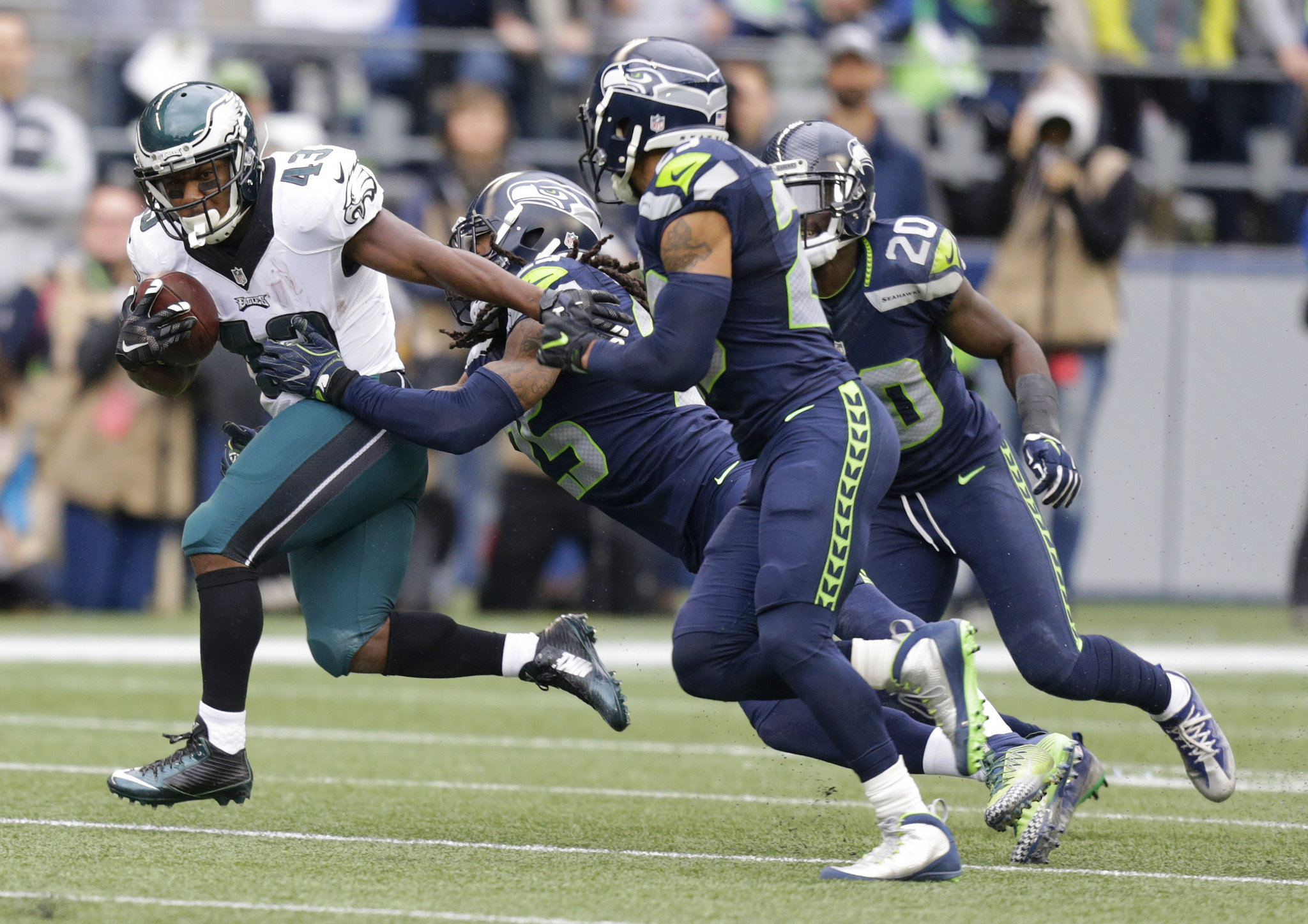 It was an ugly loss in Seattle. Despite the 11 point margin, it felt like a 30 point beatdown. Still, there is hope. (AP Photo/Stephen Brashear)

While I understand the disappoint among Eagles fans in regards to how the Eagles lost, I’m confused by the outrage that they lost.

I’m already on record declaring the Eagles a good team with a knack for shooting themselves in the foot. Still, I never expected a win in Seattle last week. Did I think it was possible? Absolutely, and this is where giving away victories earlier in the season comes back to hurt. Remember I called the Lions loss a haunting game even before the Eagles lost it? A win in Detroit or Dallas or New York makes losing in Seattle easier to digest. Going into Seattle with a limited offense is a scheduled loss. Desperation is what made it hurt so much, and desperation is a product of the Eagles failure to close out victories earlier in the season.

Before we move on the final six weeks of the season, allow me a few words about the Seahawks loss.

First, while I still don’t think the Eagles would’ve won, I wonder how the game plays out had the Zach Ertz touchdown stood. The Eagles likely take a 14-13 lead late in the 2nd quarter if the touchdown stands. That would give Philadelphia the football out of the half with a lead or at worst, a one score deficit. Instead, the Eagles punted and trailed going into the half by two scores. The Eagles offense has enough problems right now, overcoming a two score deficit is an overwhelming task when you’re doing so 3.5 yards at a time. The game swung on that foolish penalty by Nelson Agholor. The Eagles never recovered. Also, this made me laugh/cry one million times this week…

Second, I was disappointed by the defense’s inability to stop the running game in the 1st half. I know they surrender too many big plays, especially in the ground game, but I expected more. With that said, the run defense is a big problem. The Eagles have surrendered 36 big plays via the ground, good (or bad) enough for 3rd worst in the NFL. It’s hard to win in the playoffs if you can’t stop the run.

Third, I thought the Eagles defense would have a greater impact on the game. They did nothing all afternoon. One sack, zero turnovers, no big plays, and most importantly; never gave the offense scoring opportunities.

Finally, Carson Wentz is really, really struggling. I hear the arguments about how he has no weapons and his receivers drop a lot of balls. All that is true. But he also misses a lot of open receivers. Skill or no skill, a wide-open receiver is a wide-open receiver. Too many times Wentz sails the ball 3 yards over his receiver’s head. He’s aiming instead of throwing. I hate to compare him to anyone at this point, but if you watch Dak Prescott he’s more than capable of dropping the football into open spaces. Wentz can’t do that yet and it’s killing the offense because he can’t throw downfield either. The passing game is within seven yards of the line scrimmage or the chances of a completion drop below 20%. It’s hard for an offense to make a living that way. Yes, the receivers are bad. Yes, they drop a ton of footballs. Regardless, the easiest and quickest way for the offense to improve this season is for Carson Wentz to be Carson Wentz from September.

Now let’s look ahead. It’s too early for me to bust out my playoff projections, but by quick glance the Eagles are still in decent shape if they can get their act together. Four of their final six are at home, where the Eagles have yet to lose this season. In all likelihood, the road to a Wildcard berth means jumping one, if not two teams in the division. The Eagles play all three division opponents at home. Their remaining schedule outside the division is as follows; Green Bay, @Cincinatti, @Baltimore. The Packers are a disaster right now and the Bengals lost their two best offensive weapons. They’re done. The Ravens game is likely a loss. A 4-2 close is not out of the question for the Eagles, especially once you consider the finale against Dallas may not mean anything to a Cowboys team already locked into a top seed. Each of the NFC East teams has three remaining division games, one against each team. The Giants out of division schedule is the Browns, Steelers and Lions. The Redskins face the Cardinals, Panthers and Bears. The Cowboys have the Vikings, Buccaneers, and Lions. You could make the case the Eagles have the easiest out of division schedule remaining (though I’d argue Washington does). If they can take care of business within the division and get just a little bit of help from the Cowboys (beat both the Giants and Redskins), the Eagles playoff outlook gets brighter.

While it was an ugly and disappointing loss in Seattle, the season’s not over, at least not yet. The schedule is breaking in their favor and the Eagles have proven themselves a much better team at home than on the road. If Carson Wentz can take a few steps forward over the coming weeks we could have ourselves some January football for the first time in three years.