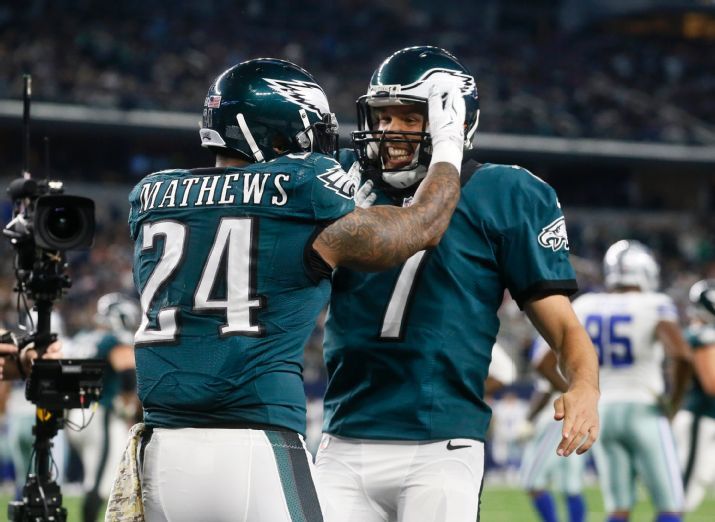 Sunday’s win was YUGE for Chip Kelly and the Eagles. Not only did it bury the Cowboys in the NFC East basement, but it also put the Eagles in prime position to win the NFC East and advance to the playoffs.

At 4-4, the Eagles have survived the toughest portion of their schedule. Of their remaining eight games, only two will be against definite playoff teams (Patriots and Cardinals). Only the Bills and then Giants (on the final day of the season) represent fringe playoff contenders on the Eagles calendar. For a team that has struggled immensely against playoff teams under Chip Kelly, that schedule is a welcomed gift. Furthermore, the Giants remaining schedule pits them against four playoff teams over their final seven games (Eagles not included).

Regardless of a nice schedule, the Eagles are likely out of the NFC Wildcard picture. They already trail the Vikings and Falcons by two games and would lose any tiebreaker with Atlanta. The NFC East is the Eagles ticket into the playoffs and they could control their own destiny as soon as next week.

Let’s be clear, given the Eagles schedule, the Giants schedule, and the outstanding play of the Philadelphia defense, there’s no excuse for the Eagles not winning the NFC East. It’s already been an underachieving season for Kelly and the Eagles. Winning a lousy division won’t erase all the disappointment, but it could buy Chip the breathing room he desperately needs. On the other hand, given how bad the NFC East is, and the way things have broken in Philly’s favor, missing the playoffs would double-down on the vitriol and frustration in Philadelphia.

If I’m Jeffrey Lurie, I tell Kelly he must win the division. With half a season to go, everything has fallen into place for the Eagles. If Kelly can’t drag his handpicked offense to a division title with nothing but smooth waters ahead, he doesn’t deserve to keep his job. That defense is too talented and the competition too bad to justify any other outcome.

Other notes from Sunday:

– Obviously, I’m not a Chip Kelly fan. However, it’s refreshing to have a coach who stays aggressive in critical situations. The 53 yard field goal in the final two minutes was ambitious considering Caleb Sturgis’ inconsistencies in his short time as an Eagle. The call to go for it on 4th and 1 in overtime was equally gutsy. In a league full of Dan Quinn’s who shutter at the thought of risk, Kelly dives in headfirst. I like that.

– The natural reaction among Eagles fans, myself included, while Dallas put up 13 4th quarter points was to complain about the pass rush disappearing. It was a legitimate complaint as Matt Cassel had time in the pocket for the first time all night. However, if you look at time of possession, it becomes abundantly clear why the pass rush disappeared. Excluding overtime, the Eagle defense was on the field for 63% of the game. We’ve said it a million times before; you can’t ask that of your defense. In a blowout you can get away with it, but in a tight game you’re going to need your defense in the 4th quarter. After nearly three seasons I’m not sure why Chip Kelly hasn’t adjusted his philosophies to aid the defense. Look at the Cowboys, for example, they were EXHAUSTED on that overtime drive and they played 13 FEWER MINUTES than the Eagles defense. The defense is the Eagles bread-and-butter this season. Unlike years past, the offense isn’t carrying big leads into the 4th quarter. Kelly must do better at limiting his defense’s snaps so they’re capable of making big plays late in games.

– Chip Kelly deserves credit for balancing out the offense Sunday night. The run:pass ration was a near perfect 50:50. That’s a lifeline for Sam Bradford. The ground game is the offense’s greatest threat despite DeMarco Murray’s continuous struggles. In fact, the Eagles have clawed their way into the top 10 rushing offenses in the NFL and are still averaging 4.3 yards per rush despite Murray’s dismal 3.7 average. As the cries for Ryan Matthews to supplant Murray as the lead horse in the run game continue, just remember that Matthews has been healthy for an entire season only once. While I’m ok with Kelly protecting Matthews at this point in the season, I’d still like to see Matthews get more touches even if he’s not the lead back. And why not steer some more touches in Darren Sproles’ direction? At this point both Matthews and Sproles are more of a threat to break a long run than Murray.

– Finally, I miss the long ball. The dump offs to running backs and five yard pick plays are excessive and mostly ineffective. This raises three questions.
1. Why would Chip Kelly bring a quarterback incapable of throwing the deep ball into his offense?
2. If you use the, “lack of talent on the outside,” as an excuse, I ask you this: Why run your best outside threat out of town and let the guy who adequately replaced him leave without bringing in a suitable option to fill the void?
3. Did Kelly really think Nelson Agholor was going to step right in and be the team’s only deep threat?
I apologize for once again pointing out Kelly’s horrific resume as a personnel guy, but man, is he bad. Outside of Ryan Matthews, it’s hard to think of one offensive move that hasn’t been a complete disaster.