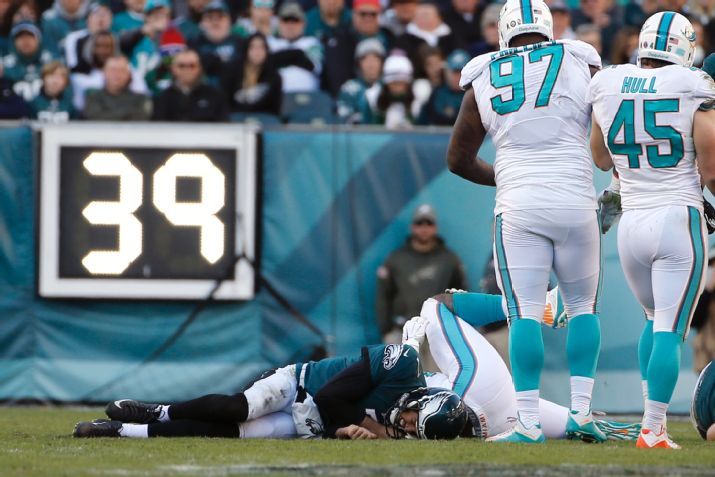 The Eagles collapsed against the Dolphins and Chip Kelly is making excuses. Again. (AP Photo/Michael Perez)

We’ve approached the point of the season where you start repeating the same things over and over again when covering the Eagles. There are only so many ways you can call a bad team bad. The Eagles are a bad team, plain and simple. They’re not close to turning the corner. They’re not 4-5 because “a few bounces didn’t go their way.” The Eagles stink because they lack talent. They stink because Chip Kelly ripped apart a playoff team.

If you don’t think the Eagles lack talent then I don’t know what you’re watching. That Dolphins defense was missing four starters, including its best pass rusher and top cornerback. In fact, Miami played most of the 2nd half without 2 of its top 3 corners. Know how many points the Eagles offense scored in the 2nd half? 3. Yeh, 3.

Remember Jordan Matthews – training camp star coming off a breakout performance in Dallas? … That guy had 3 receptions for 21 yards. DeMarco Murray, prized free agent acquisition, exploded for 61 yards on 22 carries for a whopping 2.8 yards per rush. Man, that Miami defense must be stout to hold such a talented back in check. Wait, what’s that you say? How did LeSean McCoy fair against the Dolphins just one week earlier? Oh wow, look at that. Shady rushed for 112 yards on 16 carries. Real quick, let’s relive Chip Kelly’s most asinine personnel moves.

-Discarding the team’s best receiver and one of the NFL’s premiere deep threats because he had an attitude. Did I mention the Eagles got nothing in return?
-Discarding two veteran offensive linemen from a line that had been ranked among the NFL’s best the previous two seasons.
-Discarding one of, if not the best spread offense running back in the NFL and only getting a linebacker with a bum knee in return.
-Replacing the aforementioned back with a power back unfit for the spread offense.

The list goes on and on. Remember when Kelly said Jackson and McCoy were sent packing for “football reasons?” Do “too talented” or “stealing my spotlight” qualify as football reasons? I’m asking for a friend.

Just look at poor DeMarco Murray. His average yards per rush this season is a full yard lower than his career average. I don’t even blame Murray. Chip Kelly bought an SUV and drives it like a coup. Don’t force talent to adjust to system. Build the system to fit talent. Kelly is a one trick pony who’s best trick (up-tempo offense) died halfway through the 2014 season.

Miles Austin’s NFL career ended 3 years ago. He’s been the Eagles number two receiver this season. Is that what Kelly intended when he brought Austin to Philly? I doubt it, but if you don’t put that on Kelly than the lack of production from Josh Huff and Nelson Agholor falls directly in Chip’s lap. Huff was Chip’s boy from Oregon. Agholor was the Eagles top overall pick this year. Together they’ve produced 27 more yards this season than Antonio Brown did in Week 9.

Sure, Austin was a hot mess Sunday, dropping open passes, hardly competing for 50/50 balls, and looking lackadaisical all afternoon, but that’s what happens when you’re targeting 31-year-old, 5-years-past-his-prime Miles Austin in crucial situations. Where’s Riley Cooper? Kelly gave Cooper that comfy contract extension after a breakout 2013 season. Cooper’s been a ghost since.

The 2015 Eagles are a who’s who of Chip Kelly personnel disasters. The Eagles aren’t a bounce here or a drop there from being a good football team. They’re about 15 mulligans away. The Eagles were a good football team until Jeffrey Lurie gave Kelly the keys to the kingdom. Kelly gutted the place and now complains when he can’t find a place to sit. This is on you, homeboy. Not bounces. Not missed field goals. Not drops. You did this. Own it.