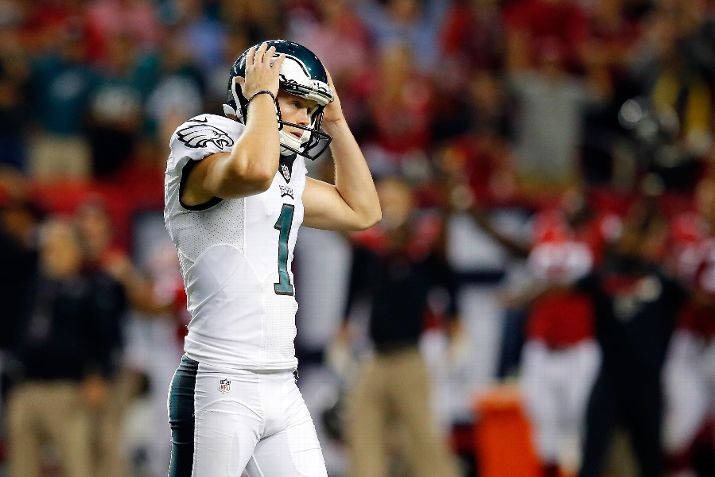 Let’s say this one more time before we break down the many things that went wrong for the Eagles: One week does not an NFL season make. The Eagles will be fine. Barring a string of horrific injuries, they’ll be in playoff contention come December. In September, that’s all you can ask of your team.

On the other hand, it’s been quite hilarious watching Eagles fans do a complete 180 over the past 12 hours. Before Monday’s game it was, “The Eagles are NFC favorites. Chip’s offense will be unstoppable. Only a three point favorite? What a joke.” Now, everyone is shouting his or her own version of, “It takes time for the offense to gel. They’ll be fine, just give them time.”

Time will certainly help the Eagles offense. After only 30 minutes the offense found its groove. Despite a mostly horrific 1st half, Sam Bradford settled down in the 2nd. Considering it’s been two years since he last played an NFL game, Bradford’s early struggles and jitters were to be expected. Bradford also, at least for one game, validated Kelly’s desire to move on from Nick Foles in favor of Bradford. His accuracy was on point and his throws were certainly quicker. With that said, there are some concerns.

The Eagles still can’t take the top off a defense. Last year, Mark Sanchez’s arm prevented Kelly’s offense from stretching the field. While Bradford has the arm, the loss of their top two receivers over the past two seasons has left the Eagles without proven speed capable of stretching a defense. Jordan Matthews is a fine receiver, but he’s not leaving opposing DBs in his dust like a DeSean Jackson or Jeremy Maclin. Maybe Nelson Agholor can be that guy. Though, last night was a perfect example of how much rookie receivers who lack size struggle early when transitioning to the NFL. Agholor struggled to get off the line. He lost position battles for the football. The Eagles inability to stretch the defense was abundantly clear throughout the night and especially on their final drive when Bradford essentially settled for check downs before the decisive interception.

Again, it’s one week. It’s unfair to put the offense (and Agholor) in a box after only 60 minutes, but it’s something to watch as the season progresses. As we witnessed in the later part of last season, this offense bogs down without those 40 yard bombs that were so dangerous with Jackson in 2013 and Maclin last season (at least until Foles went down).

Speaking of throwing the football… too much, Chip, waaaay too much. First start in two years? Sure, let’s have Sam drop back 50 times. Perhaps this was Kelly’s way of working Bradford through all his rust and jitters in a single game (which, honestly, wouldn’t be the worst idea), but a 3/1 pass/run ratio is bonkers. Even Andy Reid was begging Kelly to run the football. Why revamp and invest so much in the running back position just to completely eliminate the run game from the offense? DeMarco Murray is the best offensive player the Eagles have. I don’t think that’s up for discussion. Murray rushed the football eight times Monday. I’m all for protecting Murray for a long season, especially after the work he put in last year for Dallas, but 8 rushes needs to be up to at least 15 and maybe even 18-20. If your counter argument is to blame the offensive line’s poor play last night, well then we’re already screwed because that Atlanta defense is not good. AGAIN, it’s only one week, but the running game needs to be this offense’s bread-and-butter if they’re to compete deep into the playoffs.

Also, and this happens a lot in the NFL, it bothers me to no end when coaches take a 3rd and 1 for granted when running an up-tempo offense. I like Ryan Matthews, but you’re paying the NFL’s leading rushing from 2014 a lot of money. He’s not doing you any good on the sidelines in a crucial 3rd and 1 situation late in the game. I know the idea is to keep the defense off balance and such, but there comes a time in every football game when you simply need to be better than you’re opponent. Cut the cuteness, line up, and let the NFL’s best running back jam it down the defense’s throat. These are the things I hate about Kelly’s offense.

Now for the really ugly reality from Monday: The Eagles defense was bad. Oh so bad. Where should we start? How about with the Falcons letting the Eagles off the hook. I remember Falcon drives stalling out twice because Atlanta ran sweeps to the outside on 3rd and 1. The Eagles defense is fast. Not a good idea by the Falcons. Additionally, Matt Ryan was not great Monday. He left a handful of plays on the field. While the Kiko Alonso interception was an exceptional grab, the ball was badly underthrown. Roddy White was wide open in the back of the end zone. That wasn’t even Ryan’s worst underthrow of the night. In the middle of the 4th quarter Ryan had Devonta Freeman streaking down the right sideline for an easy touchdown. Connor Barwin was already toast, trailing Freeman by 3 yards. Ryan’s throw forced Freeman to essentially stop, allowing Barwin to get his helmet in the way as he desperately dove toward Freeman. Lastly, what in the world was Atlanta doing with Julio Jones? He spent as much time watching the offense from the sidelines in the 2nd half as he did on the field. Was he hurt? Out of shape? The Eagles had no answer for Jones. It made no sense why Atlanta held him out so frequently.

Ahh yes. Julio. I’m sure the mere mention of “Julio” causes Byron Maxwell to crawl into the fetal position and hide. Last season the Eagles defense suffered because Bradley Fletcher was always five yards behind opposing receivers. I joked last night the Eagles are paying Maxwell $60 million to only be three yards behind opposing receivers. I’ve heard plenty of folks write off Maxwell’s performance as the result of Jones’ greatness or the growing pains of being in a new defense. Both may be true. However, one cannot ignore the difference between 2015 Byron Maxwell and the 2014 version: He’s no longer surrounded by All-Pros. Malcom Jenkins, Walter Thurmond and Nolan Carroll are not Earl Thomas, Kam Chancellor and Richard Sherman. Fletcher was so bad last season the Eagles had little choice but to overpay Maxwell. However, paying a cornerback shutdown corner money does not make him a shutdown corner.

Finally, where was the pass rush? The only time pressure got home was the result of a blitz. Blitzes are fine, but given the weakness of the secondary, generating pressure with a four man rush would greatly benefit the Eagles. If the front seven that I thought would be dominant can’t outplay a Falcons line that was suspect at best, how ugly will it be next week when they face the best line in football? One more time, it’s only Week 1. Maxwell won’t face Julio Jones anymore. He’ll likely find his legs in the defense. The defensive front seven is too talented to be so ineffective for the next 16 weeks. Regardless, these are legitimate (and debilitating) concerns if they continue.