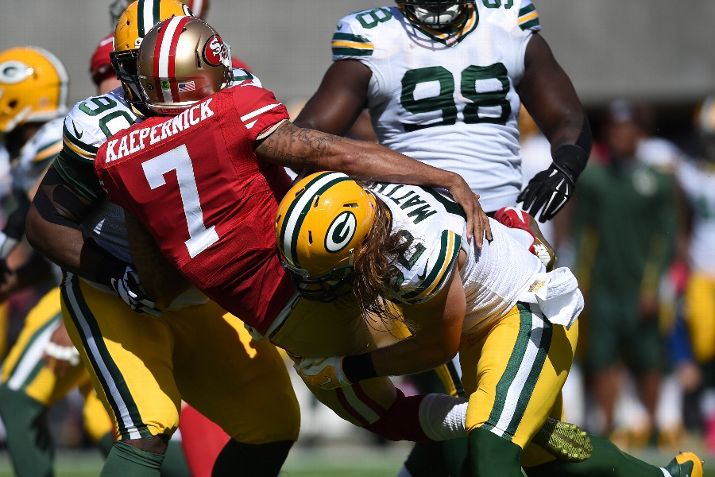 TEN
I’m far from a fan of Colin Kaepernick. He’s always been too arrogant for my taste. However, it’s hard not to feel bad for Kaepernick. His once promising career is now careening off a cliff at Mach 3 speeds. In his last 9 games, Kaepernick has broken the 200 yard passing plateau once, which in today’s NFL is an alarming indictment. Furthermore, his completion percentage surpassed 58% only three times in that span and he’s tossed 9 interceptions to only 6 touchdowns for a backward INT/TD ratio of 3/2. If you’re new to football, that’s not good. If you like advanced stats, Kaepernick’s QBR has settled below 45 in 6 of those 9 games, including 2 performances that rated 10 or less. For reference, Kaepernick’s QBR dipped below 45 only 9 times in all of his previous 41 appearances (including postseason). Kaepernick will be 28 next month. While he was never an elite passer, Kaepernick was good enough to make plays with his arm. Right now, he’s incapable of moving the offense. He can’t read a defense and his throws and timing are completely off. Simply put, he can’t play quarterback. As long as that remains the case, the 49ers will be stuck in mud.

NINE
Field goal kickers were huge in Week 4. There were those like Justin Tucker and Adam Vinatieri who kicked their teams to victory. On the other side of the coin, kickers like Blair Walsh and Caleb Sturgis missed very makeable field goals that likely would have swung the outcome of the game, or at the very least, forced overtime. Cairo Santos booted seven field goals for the Chiefs. Jason Myers missed two field goals that would have been the difference in a loss to Indianapolis. Josh Scobee’s two misses cost the Steelers a win and the opportunity to bury the 2015 Ravens. The aforementioned and newly signed Sturgis flopped in his debut with the Eagles by missing a 33 yard field goal and shanking an extra point in a game that was ultimately decided by 3 points. Chandler Catanzaro was excellent for the Cardinals as he kicked five field goals in a losing effort. Buccaneers rookie Kyle Brindza missed multiple field goals for the second week in a row, including a 29 yarder. Kickers make coaches millions of dollars. Or they get them fired.

EIGHT
Chip Kelly is the best. As you know by now, I’ve never been a fan of Kelly. I regret those feelings now. I love Chip Kelly. He’s endless entertainment. Kelly makes excuses like my own kids. He’s either blaming his players or opposing defenses. This week, Kelly took his excuse game to new heights, pulling out the, “if we make two kicks we’re 3-1,” logic. Never in my life have I witnessed an NFL coach rationalize things like a 13 year old fan. It was incredible. Fans make silly rationalizations like that. I even offered one two days ago. But NFL coaches can’t be floating in the clouds with unicorns and Care Bears. You are what your record says you are, Bill Parcells once said. Kelly doesn’t pay attention to records. He cares only about feelings. I love you, Chip Kelly. Never change.

SEVEN
While I’m not quite there, I’m preparing myself to accept that the NFC South may in fact be a respectable division in 2015. The division boasts two of the NFL’s six undefeated franchises. However, I’m still waiting until both Atlanta and Carolina’s schedule gets a little tougher. Right now the Falcons have benefitted from a breezy schedule. The Panthers’ schedule has been a straight up cupcake. I was skeptical of the Cardinals for this reason last week, so it’s only fair I pump the brakes on the NFC South, too. But unlike four weeks ago, I’m very open to the idea of the NFC South being the NFC’s 2nd best division.

SIX
I thought Buffalo was for real this year. Right now the Bills and Rex Ryan are trending toward fraud. Through four weeks, the Colts are a mess and the Dolphins have played like one of the worst five teams in the NFL. Those two teams account for Buffalo’s wins. Perhaps injuries are to blame, but Buffalo’s defense hasn’t been nearly as good as expected. Buffalo looks more like an 8-8 team than a threat to the Patriots AFC East crown.

Power Rankings are always controversial, mainly because people take it personally when you don’t like their team. I think the top 5 (in some order) is unanimous. After that, I’d understand if you demand an explanation, so here you go. The Seahawks defense is slowly rounding into form. That’s all that matters in Seattle. If the defense is clicking, it doesn’t really matter how slow the offense is coming along. Why the Giants at 9? Well, because I watched the Jets lose to the laughably bad Eagles. I also think the Giants are being undervalued right now because of the way we overreact when teams give away victories.

FOUR
Andy Reid’s run/pass ratio is getting out of control again. After a 50/50 split in Week 1, Reid’s Chiefs have thrown the ball twice as many times as they’ve rushed it. Granted, Kansas City has found itself in situations where they trail by multiple scores late in games, but only the Packers had the Chiefs on the ropes by halftime. In Week 2 against Denver, the Chiefs never trailed until there were less than 30 seconds remaining in the game. In Week 4 against the Bengals, the Chiefs were within one score until late in the 3rd quarter. Obviously, trailing by large margins will necessitate abandoning the run, but a 2/1 pass/run ratio is too extreme when games are still within reach, especially if your quarterback is Alex Smith.

THREE
What a painful way to lose for the Detroit Lions. Despite an 0-4 record, Detroit is still a good team. If the offense can ever figure out how to utilize all that talent they very well could claw their way back into playoff contention. If you’re a Lions fan, how much do you distrust NFL officials at this point. Last night was obviously a costly blunder by the referees, but the no-call on an obvious pass interference penalty that would have clinched the game in Dallas in last year’s playoffs was equally painful. I feel for you, Detroit.

TWO
Dads are always wise. This was immediately after Caleb Sturgis missed a 33 yard field goal at the end of the 1st half.