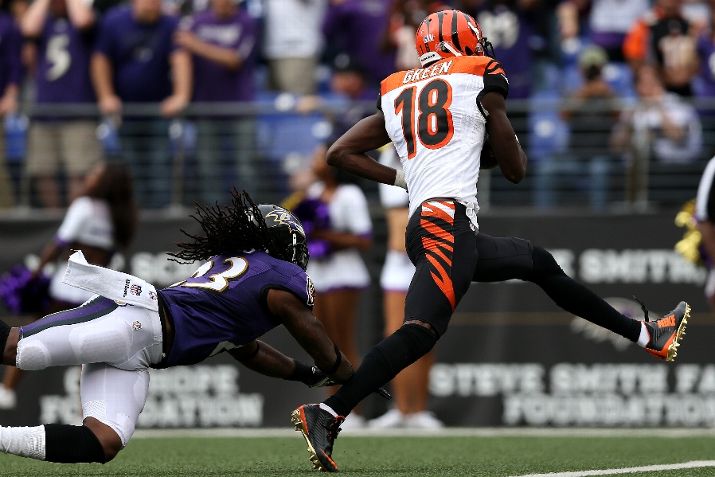 The age of the receiver is upon us. (Photo by Patrick Smith/Getty Images)

TEN
There was a time when running backs keyed a great NFL offense. Emmitt Smith, Marshall Faulk, LaDainian Tomlinson and Priest Holmes, to name a few, were the premiere offensive threats in the NFL at their respective times. Present day NFL offenses revolve around the passing game. Naturally, receivers have evolved as the offensive game-changers. Look around the league; only LeVeon Bell resembles Tomlinson and Faulk in both style and production. And Bell is not even the most dangerous weapon in his own offense. That title belongs to receiver Antonio Brown. In Atlanta, the Falcon offense goes as Julio Jones goes. Dez Bryant’s injury undercut Dallas’ offensive potential even before the Tony Romo injury. It’s no coincidence that Tom Brady’s resurgent numbers over the past two seasons have coincided with a healthy Rob Gronkowski. AJ Green, Calvin Johnson and Odell Beckham Jr. also belong in this class.

Here’s simpler way too look at the drastic change in receiving production: From 1996 through 2011, an average of 5.25 players reached 1,300 receiving yards per season. Beginning with the 2012 season, that number doubled. Furthermore, based on current projections, 16 players will pass that 1,300 yard mark in 2015. The NFL has rapidly transformed into a league relying heavily on the talents of receivers. Given the group of young stars at the position today, the NFL is in good hands.

NINE
I understand the Cardinals, who are averaging 42 points per week look like gangbusters right now, but can we slow down on the “Cardinals are class of the NFC” talk, please? Look at that schedule. Arizona’s opponents are a combined 1-8. The Bears and 49ers look like two of the worst five teams in football right now. The Saints are not much better. Sure, Carson Palmer and Larry Fitzgerald turned back the clock to 2005 and look unstoppable right now. And they might be unstoppable. I would just prefer we wait to crown anyone at this point, especially teams that have yet to face a capable opponent.

EIGHT
I don’t feel like elaborating on these topics but they are worth noting, so let’s go bullet points again.

SEVEN
I thought the Cowboys proved Sunday they’ll remain a looming threat in the NFC East. Dallas’ offense was great in the 1st half Sunday. Though they went AWOL in the 2nd half, there’s enough evidence there to see they’ll be competent moving forward. They should have a respectable running game against just about any opponent behind that stellar offensive line. Though he’s by no means a legit starter, Brandon Weeden looked capable of managing the offense. The defense was the real weakness Sunday and that unit should get a boost in two weeks when Greg Hardy and Rolando McClain return from suspension. Rookie Randy Gregory will be back shortly after that. The return of Hardy and then Gregory should relieve some pressure from a depleted secondary that was exposed by Julio Jones. (Though, in fairness to Dallas, who doesn’t Julio Jones expose?) Even the schedule isn’t as bad for Dallas as initially expected. Until Tony Romo returns, I only see two games Dallas has almost no chance of winning; New England and Seattle. With the Eagles still struggling, the Giants being as unpredictable as ever, and the Redskins lacking a quarterback, Dallas won’t fall too far behind in the NFC East, if they fall behind at all.

SIX
Despite a Week 1 loss in Denver, it appeared Baltimore was successful in upgrading a defensive secondary that finished the 2014 season ranked 23rd in the NFL. Turns, out, the Ravens success against Peyton Manning and Co. may have had more to do with Manning’s arm issues than Baltimore’s defensive talent. Since surrendering only 150 passing yards to Manning and the Broncos, the Ravens secondary has allowed over 350 passing yards in consecutive weeks. Maybe that’s an easier pill to swallow if Tom Brady and Aaron Rodgers are the opponent, but the Ravens defense has faced off against Derrick Carr and Andy Dalton the past two weeks and been torched. The loss of pass rusher Terrell Suggs certainly plays a role in the Ravens struggles against the pass, but even a great player like Suggs doesn’t account for a 200 yard disparity. At 0-3 the division is likely out of reach for Baltimore, but the Ravens season may have received a stay of execution with the Ben Roethlisberger injury. Still, Baltimore has four days to find a solution, because if they don’t, Antonio Brown will put up another 200 yard day and the Ravens will find themselves at 0-4 and their season all but over.

1. Brandon Marshall lateraling the football to a ghost while trailing 17-0.

4. Getting out of bed on Sunday – Baltimore’s secondary

FOUR
Remember when I wisely predicted the Patriots would have a lackluster performance in Week 3 against the Jaguars? Yeh. That didn’t happen. Instead, they scored 51 points, set a team record for 1st downs and broke the NFL record for 1st downs through three games (88). Once again, congrats to the NFL for poking the bear. Next time, if the NFL wants to punish the Patriots, they should ignore them completely and heap endless praise on Bill Belichick and Tom Brady. Only when the whole world was certain the Patriots would finish 19-0 did New England fall on its face.

FOUR B
If you didn’t watch, Jimmy Clausen’s start for the Chicago Bears went exactly how you probably imagined it. The offense totaled 146 yards. Clausen went 9/17 for 63 yards. The Seahawks played like a team that knew a win would only require them to make it from the locker room to the field.

THREE
Anyone know what happened to the Rams offense that hung 34 points on the Seattle Seahawks in Week 1? Over the last two weeks, St. Louis has mustered one touchdown and a total of 16 points. Points aren’t the only issue. The Rams can’t move the football. After accumulating 19 1st downs and 350 yards of offense in Week 1, the Rams have squeezed out only 471 yards and 23 1st downs in the two weeks since. St. Louis inserted rookie Todd Gurley into the lineup for Week 3 hoping he could boost the offense, but Gurley looked rusty and limited from a knee injury last year. He rushed for 9 yards on 6 carries. Nick Foles was supposed to improve the Rams offense but with every start Fole’s 2013 season looks more and more like a fluke.

TWO
Poor Steve Smith. I thought he saved the Ravens season Sunday. Twice in fact. His gritty 50 yard TD on 4th down (video below) looked to finally swing the game in Baltimore’s favor as they scored 17 unanswered points. After Baltimore lost the lead, Smith again fought through a tackle on a crucial 3rd and long with Baltimore trailing late in the 4th quarter. He would score the go-ahead TD five plays later. Baltimore wasted a vintage performance from Smith Sunday. Such a shame.

Steve Smith is something. pic.twitter.com/6tI6NrWGhr