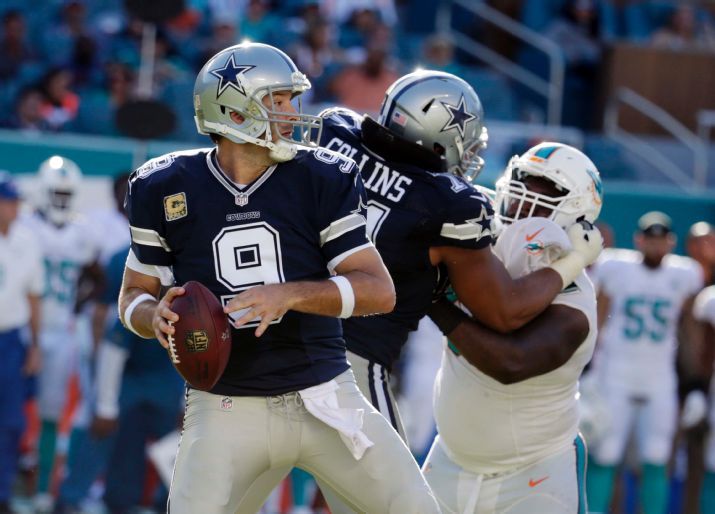 TEN
Tony Romo returned after a seven game absence to lead the Cowboys to their first victory in over two months. As expected, Romo wasn’t great, but he was effective and gave the Dallas offense a threat of force it has sorely missed. I’m not here to talk about Romo, though. Darren McFadden deserves a ton of credit for his 2015 season. In training camp many laughed at the Cowboys for bringing in the “soft” and oft injured running back. After Joseph Randle struggled and was ultimately cut for reasons outside of football, the doubters didn’t think Dallas had an every down back. Since Randle’s dismissal, McFadden has rushed for more than 115 yards in three of five games. He’s just outside the top ten in rushing, though he’ll likely finish the season among the top ten if he remains healthy. Romo’s return gives the Cowboys playoff hope, but that offense wouldn’t be as effective if not for a potent running attack.

As for the playoffs, Dallas is still a long shot. A win on Thanksgiving over the undefeated Panthers would certainly swing momentum in their favor. However, and this is what people fail to realize, the Cowboys performing well doesn’t mean much in their plight to reach the postseason. It’s only half the puzzle. Dallas will need assistance from a handful of other teams, including a collapse by the three teams ahead of them in the NFC East. (One is collapsing. Another is flirting with collapse.) While it’s certainly possible Dallas wins the division, it’s still unlikely.

NINE
I was impressed by the Bengals and Andy Dalton Sunday night. Though Cincinnati lost, I thought it was important Dalton performed well in a nationally televised game against an elite opponent. The Bengals hung around despite having a depleted secondary against the NFL’s top offense. Unfortunately, horrible clock management on the Bengals final drive was what ultimately cost the Bengals a shot at victory in overtime.

With 1st down and 83 seconds remaining, the Bengals were at Arizona’s 33. Needing only a field goal to tie, the Bengals could dictate the game because the Cardinals had no timeouts. We can all agree the goal in this situation is to score a touchdown and win, but the secondary goal is to make sure Arizona has little or no time left, especially if you can only tie the game. Instead of starting the clock on 1st down, the Bengals took a shot deep to AJ Green. Hmm, ok, I can see why you’d want to be aggressive there. On 2nd down, the Bengals threw an out pass. Marvin Jones made the catch while heading out of bounds. Clock stops. 3rd and 2 with a minute and 15 seconds remaining. Run the ball. YOU HAVE TO RUN THE BALL HERE, Marvin Lewis! Carson Palmer has been shredding your wounded secondary all night. You can’t give him a minute to get into field goal range. Run the ball and hope you get the 1st down. If not, you kick the field goal and the Cardinals have less than 30 seconds and no timeouts. But no, the Bengals threw into the end zone one last time. It fell incomplete. Carson Palmer got the football with 58 seconds left and needed only three plays and 38 seconds to move the football 57 yards into field goal range. Game over. This is why the Bengals are the Bengals.

EIGHT
The Cardinals are really good, but that defense has started giving up points, a lot of points. Neither Andy Dalton nor Russell Wilson is considered an elite passer and both have hung 30 points on the Cardinals the last two weeks. Landry Jones, Josh McCown, Nick Foles; there have been some surprising names with big days against the Cardinals defense. At some point down the road that could spell trouble, especially in the postseason against guys like Aaron Rodgers, Cam Newton or even Eli Manning. You can almost see how the Cardinals will lose in the playoffs. Opposing offense will get hot and Carson Palmer, despite a great outing will have one or two backbreaking turnovers that ultimately swing the game. It almost happened in Seattle and it almost happened Sunday against the Bengals. That’s something to look out for as the playoffs approach.

EIGHT A
I shouldn’t forget about the Packers but I ran out of time. My apologies. My brief thoughts… I thought the return of Green Bay’s running attack was huge for the Packers. It gave Aaron Rodgers more time and obviously gave the play-action pass some validity. However, I still thought the biggest reason for the Packers success Sunday was that receivers actually made plays. Over the last two weeks I saw so many plays where Rodgers made a perfect throw and receivers failed to make a play on the ball or dropped it altogether. While a running game relieves a lot of that pressure, the Packers are still most dangerous when their receivers aren’t neutralizing Rodgers’ arm. Also, the Vikings have a little of that “we pummel bad teams but can’t quite hang with good teams” stench to them.

SEVEN
Matt Ryan had another typical Matt Ryan day. He threw another red zone interception (he leads the NFL) and collapsed in the 2nd half yet again. This might be it for Ryan. I don’t mean he’ll be cut or anything, but this just might be who he is as a quarterback. He’s Jay Cutler. He’s Matthew Stafford. He can win 6-10 games and put up nice stats from time-to-time, but he’ll never take you where you ultimately want to go. In fact, he’s more likely to take you the other direction with boneheaded mistakes. Atlanta was in complete control of that game. At one point in the 3rd quarter the Falcons had scored touchdowns on three of four drives to take a 21-7 lead. Then backup running back Tevin Coleman fumbled. Two possessions later Ryan threw a horrific pick-six at his own one yard line. From that point on, Ryan was erratic and frazzled, finishing the game a miserable 5/12 with another interception.

While Ryan deserves a large portion of blame for Atlanta dropping four of their last five, he has company in the blame department. The Falcons running game has disappeared over the last three weeks. (Devonta Freeman’s injury in the 1st quarter Sunday didn’t help.) The line has steadily gotten worse in pass protection. The play calling has been downright dreadful at times. I counted at least four red zone plays inside the ten yesterday where Julio Jones was not on the field. How this makes sense is beyond me. As a defense, Jones is the scariest threat the Falcons possess. Why give the defense an easy out by removing him from the game? Furthermore, Atlanta relentlessly ran play-action despite their inability to run the football. It was like they were begging the defense to murder their quarterback. Why not call quicker, short-drop passing plays when Ryan is under siege? Juliio Jones doesn’t need five seconds to get open. I think he can get off the line and get open just fine. The Falcons are the most perplexing team in the NFC. Many thought their defense would be their undoing this year. Instead, it’s the offense, and a lot of that can be tied to the poor play calling and the subsequently lousy play of Matt Ryan.

SIX
To no one’s surprise, Seattle was great Sunday against a depleted and defeated 49ers team. Last week I mentioned that Seattle is on par with its 2013 and 2014 teams in both rushing offense and points allowed. Both defined those NFC champion Seattle teams. I also mentioned the points allowed was a little misleading. Here’s why. First, Seattle has had the benefit of playing the decrepit 49ers twice. San Francisco ranks dead last in total offense and points scored, averaging less than two touchdowns per game. Second, Seattle’s schedule is full of dismal offensive teams. Wins over the Lions and the Tony Romo-less Cowboys inflated Seattle’s defensive potency. Detroit ranks as the NFL’s 4th worst scoring offense. Dallas ranks as the 6th worst. Seattle even lost to what is now the NFL’s 2nd worst offense in Week 1 (Rams). Finally, Seattle had the added benefit of shutting out the Bears when Jay Cutler sat due to injury. Jimmy Clausen is perhaps the worst backup quarterback in the league. Even with Cutler, Chicago ranks outside the top 20 in almost every offensive category, including points scored. If you consider Seattle’s defensive performance against more apt offenses, it’s pretty clear the Seahawks are overrated statistically. Against top 10 scoring offenses (4 games), Seattle is 0-4 and allowing 30 points per game. If you’re bad at math, that’s significantly higher than their average 19 points per game. Stats may not lie, but they can be misleading.

FIVE
POWER RANKINGS. I didn’t want the Colts in my power rankings. With the Falcons looking closer to the team that went 6-10 last year, they couldn’t return to the rankings either. That left the Seahawks, Bills, Giants, Texans or Chiefs. (I considered the Bears for a moment, too.) As you can see, I took the Seahawks because I won’t write that team off until the playoffs start and they’re not there. I couldn’t go with the Giants because they have two really bad losses I can’t forget just yet (Eagles and Saints). While the Texans are showing signs of life, the Chiefs have won four straight. And yesterday made me miss Andy Reid.

FOUR
Jeff Fisher can’t keep his job if the Rams don’t somehow fight their way into a playoff berth. Fisher rallied the rams to a 7-8-1 record in his 1st season with St. Louis coming off a dismal 2-14 campaign in 2011. That’s about the only progress the Rams have seen under Fisher. Since that 7-8-1 debut, Fisher’s Rams have finished 7-9, 6-10, and are currently 4-6 after dropping their 3rd straight game Sunday. As you can see, Fisher’s team has made zero progress in the last three seasons. That defense is way too talented to be 4-6, especially considering their schedule. Furthermore, St. Louis finished with only 213 yards of offense Sunday. Thomas Rawls and Doug Martin both surpassed that total individually. Baltimore isn’t a great defense, either. That 213 number is nearly 150 below their season average.

FOUR A
Remember when we thought Cam Newton and the Panther offense would struggle to put points on the board? I think we missed on that one. Carolina is a tenth of a point shy of averaging 30 points per game, good enough for 3rd in the NFL. Take a bow, boys, you’ve certainly earned it.

THREE
A few weeks ago, the AFC Wildcard looked like a three team race between the Steelers, Jets and Raiders. Not anymore. The Jets have lost four of five and Oakland has dropped four straight. Meanwhile, the Chiefs are riding a four game winning streak and the Texans are coming off three straight wins as well. In all, there are nine AFC teams with records between 6-4 and 4-6 clawing for two Wildcard spots.

THREE A
Amazingly, the same phenomenon exists in the NFC. The only difference is the NFC’s nine teams between 6-4 and 4-6 are likely vying for one Wildcard spot as long as the Vikings/Packers continue to excel. Obviously, that could change, but with six weeks to go the NFC North runner-up has the inside lane in the Wildcard race.

TWO A
Speaking of great receivers, Amari Cooper has been experiencing some growing pains of late. Cooper hasn’t broken the 100 yard plateau in his last four games. Sunday against Detroit took the cake, though, as Cooper finished with only one reception for four yards

Bucs are 1st road team in NFL history to have QB (Winston) throw 5+ TDs & RB (Martin) rush for 200+ yards in a game pic.twitter.com/4ezyiBraZj